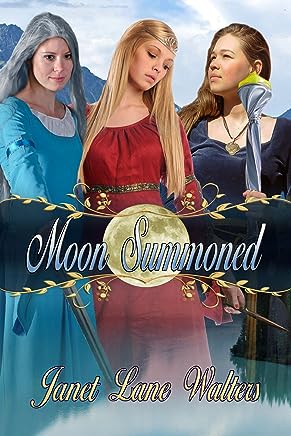 Join the authors at #MFRWHooks  http://mfrwbookhooks.blogspot.com here to find some great excerpts. Mine is Moon Summoned, a fantasy romance with three heroes, three heroines and three villains.

Three Moon Summoned women. Ashiera the Seer who controls the winds and sees into the thoughts of others. Dian the Warrior who controls fire and fights with the sword. Egeria the Healer who controls fluids and heals those who are injured. They are joined in their battle by Sieper a sailor who knows the winds, Kobe once sworn to the Lord of Shadows and Jetan a healer of animals. These three vow to help the three women against those sworn to Evil.
Lugal the Cabal reads the winds and thoughts. Sargon the Gladius controls fire and the armies of the Lord of Shadow. Lugal the Cabal has knowledge of herbs and uses them for evil. These three with their cohorts will face the three and three sworn to the Mistress of the Moons.
Janet Lane Walters has written a story that will take you to another time and place. She gives vivid descriptions of her characters and their role in this story. Ms. Walters has constructed a civilization so real that you will feel its very existence. A place where men rule women as chattel for their sexual needs, and three evil rulers who drain their bodies of their very essence for spells and to gain power. There is betrayal and treachery inside of plots, as each priest plans to rule alone. Ashiera, Egeria, and Dian are bound to the spirits of the ones who came before them. They discover a truth that will astound them, and have them doubting their chosen path. They will experience a love that is forbidden and discover that two stand together better than one. I could feel the emotional struggle between love and destiny, described so passionately by the author. I hope Ms. Walters plans to continue this story. I could feel that this is just the beginning of this tale. Janet Walters book, Moon Bright, Moon Dark will go on my keeper shelf, beside such authors as Charlotte Boyett-Compo and Nancy Gideon. I give this story Five Hearts and recommend it highly. Enjoy!

The setting sun brought shadows creeping along the mountain slopes. From the battle lines stretched across the plateau, the smell of blood mingled with the dust. Metal clanged against metal. Shouts, curses and screams filled the air. The moans of the wounded broke the Seer’s concentration on the amber light streaming from the crystal atop her staff. The beam sent a jagged pattern through the growing darkness.
A piercing cry arose. The ruby ray from the Warrior’s sword shot toward the sky. The Healer darted among the fallen and knelt beside the sorely wounded woman. Blue light from the Healer’s wand focused on the Warrior’s wounds. The Healer poured life-sustaining energy through the azure beam.
Gusts of wind drove thick waves of fog from the mountain peaks to obscure the plain and to cover the retreat of the women. A cluster of the servants of the Mistress of the Moons, clad in tunics of amber, red and blue, stumbled after those who bore the Warrior. They carried her between a pair of standing stones into a narrow passage that led to a crater lake and the Place of Choosing.
The Seer stumbled and would have fallen if the Healer hadn’t caught her arm. Together they moved through the fog. The edges of their cloaks brushed the standing stones.
“How much time have we?” the Healer asked.
The Seer tightened her grip on the staff. “I pray enough to complete the ritual before the eclipse hides the light of the moon.”
The Healer guided the other woman into the narrow passage. “With the coming of the fog, the bright moon and the dark moon have risen. We must succeed or all is lost for the One we serve.”
“Pray our call is answered before the next eclipse and the time of the lunar of the dark moon. For now and to all eternity, the thirteenth moon, the dark moon will rise each year to fill the sky.”
“We must wait thirteen years before this comes to pass. Pray the Mistress of the Moons will hold the Queen of Darkness at bay so the ones we call will have a chance.”
“Unless those who serve the Lord of Shadows call the Queen forth.”
The Healer sucked in a breath. “Never will the ones who serve the shadowed one share the rule.”
The Seer sighed. “Mistress bless. So be it. We will call, the Three will come and all will be as it has been. Unlike those in the other nomes, we can’t allow a drastic change to alter what we’ve built.”
“Agreed,” the Healer said.
They emerged from the passage and walked across the rock-strewn earth to the crater lake. The walls on three sides formed a crescent around the pool.
The Seer marshaled enough strength to walk unassisted. Her hair, darkened by age, flew wildly around her face. The Healer’s hair was as black as a night beneath the dark moon.
The remaining women clustered at the edge of the lake. The Seer and the Healer took the ends of the stretcher on which the Warrior lay. They waded through the cool water to the isle in the center of the lake. Gently they laid their companion on the pale rock. The Healer placed the Warrior’s sword on her chest and crossed the woman’s arms beneath the orb in the hilt.
Those who served the Mistress as seers, warriors and healers held torches aloft.
The ebon globe slid across the surface of the pale golden moon. The Seer passed her hand over the head of her staff. From the depths of the amber crystal, a band of pale yellow light flowed.
“From out of time and out of space, we three, Seer, Warrior, Healer, send our spirits questing for those who will continue the battle against the Lord of Shadows. We call for those who will keep the faith exactly as we have. Mistress of the Moons, pray keep the Queen of Darkness in bonds so You will prevail.”
The Healer raised her wand. The blue crystal on the tip flared and blue light shone. “The time of passing is upon us.” Her voice held neither fear nor anticipation. “Moon bright becomes Moon dark. May this eclipse add strength to our quest.”
The dark orb continued its stately progress across the face of the moon. The Seer held her staff so the light shone across the body of the Warrior. “How fares our sister?”
The Healer pressed a hand against the Warrior’s chest. “Her heart beats, but her body weakens. Can she bring forth the light of her sword?”
“The Mistress will sustain her.”
The Healer gasped. From the ruby crystal embedded in the hilt of the Warrior’s sword, a red ray rose to touch the blue and amber. “Just as our lights unite, we three are one.”

Moon Bright, Moon dark,
Mistress of the Moons.
From out of time,
From the depths of space.
Call the Three,
Seer, Warrior, Healer.
Empower them.
From conception comes the thought.
From the thought rises the desire.
From desire springs the seed.
And the fruit becomes the harvest,
Ending shadows, bringing light.

The women who had gathered at the edge of the lake added their voices to those of the Three. Once, twice, thrice, they intoned the call. As the dark globe completely covered the moon, they plunged their torches into the water. Clouds of herb-scented smoke obscured the isle. When the sun rose only a staff, a sword and a wand remained.


Posted by Janet Lane Walters at 6:53 AM

I felt like I was right in the scene.