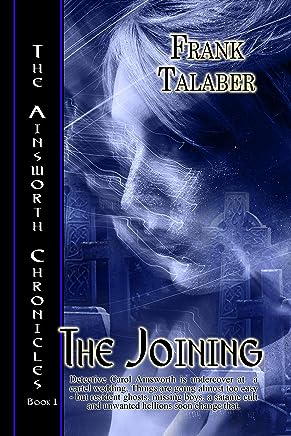 Book One in The Ainsworth Chronicles: THE JOINING.

Here's my elevator pitch.
Slam Ghost Busters into a large cooking pot, use a classy hotel as the base, toss in a female Mickey Spillane and a female Edgar Cayce, stir in a herbal mix of the mob, add a pinch of abduction, season generously with ghosts and top with a sprig of TinkerBell when cooked.

I hate You! My wife who is off on medical leave, won't get out of the bathroom. Can't put your book down. LOL. Bruce W.
I talked to Frank at work and bought four of his novels, all right up my alley, urban Fantasy and Paranormal thrillers. But as we were leaving my girlfriend opened up the copy of The Joining, I had purchased and said, "Stop! You gotta go back I have to buy this book." Frank had hooked her in the first three pages. Well Done.  Joyce Nicholls

Shuttered Seduction
He only wanted to steal her company. She only wanted Not to fall in love with him. Both had dark secrets they didn't want revealed.
All Roy wanted to do was seduce Julia-Rae and convince her to sell him her company. Julia-Rae wanted to shut him out of her heart like every other man that got close. Only what do you do when you fall in madly in love with the enemy and the enemy with you. Will the dark secrets they hold tear you apart?
Review, Janet Lane Walters...Great romance. Spicy with both hero and heroine fighting the attraction. She's an independent woman who loves being in charge of her own magazine and running things the way she wants. He wants to gain her magazine for the group of travel ones he heads. From their first meeting in Peru sparks fly between them.
https://books2read.com/Shuttered-Seduction

What if a native legend came back to life and was saddened by the destruction of his people, their culture and their environment?
What if that legend was the Haida creator god Raven and he spirited away the girl you were falling in love with?
What if you didn’t believe in native spiritualism and found yourself battling Raven with only a shaman to help you?
Inspired by true events that took place on the Queen Charlotte Islands, Raven's Lament centers on a journalist who investigates a killing tied into the destruction of old-growth forest and becomes tangled up in a spirit war. He finds love and meaning as he encounters a centuries-old Haida prince, formerly imprisoned along with Raven in a rare Golden Spruce tree.

REVIEWS:
"After being stranded twenty kilometers from the nearest road at the tip of Rose Spit, Haida Gwaii, and having to push his spanking new SUV a few kilometers along the beach before the tide came in and we ran out of booze, my first reaction on being asked to write a back cover blurb was, “over my dead body." Some people will do anything to get an endorsement.”
Susan Musgrave
https://books2read.com/Ravens-Lament

Vancouver’s mayor is brutally slain in Stanley Park. His family is missing, no clues. So begins Carol’s first big detective case.  Toss in a hot male reporter. Vengeful bikers, a sexually starved succubus, a boatload of out of sync demi-gods and a disappearing shaman who holds all the clues. Oh, it’s going to be a fun night in the park.
If Charles de Lint's Greenmantle or Moonheart grabs you, you'll not be able to put down Frank Talaber's Vancouver's Spirits.
Review By Robert Winslow.  A refreshing change from the usual and all too familiar cast of deities and spirits. Talaber pulls his characters from the vast and untapped riches of aboriginal myth and legend, bringing to life their intricate stories largely unfamiliar to wider audiences. He intertwines their ancient tales with the dark, gritty and dangerous under belly of contemporary urban life. The whole makes for an interesting and compelling read with an ending that's impossible to predict.

Posted by Janet Lane Walters at 7:06 AM