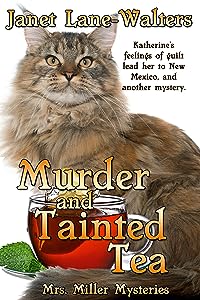 Join the authors at    http://mfrwbookhooks.blogspot.com         to find some interesting and enjoyable excerpts. You can find my selection, Murder and Tainted tea if you're in the mood for a cozy mystery with a slowly developing love affair.

Katherine heads to Santa Fe, New Mexico along with a Maine Coon Cat kitten to spend New Year’s Eve with Lars. Her guilty feelings over the organist’s death has her needing an escape. When she reaches Santa Fe, she discovers Lars is missing. She seeks and finds him and steps into another mystery.
Lars’ daughter dislikes Katherine but when the young woman is kidnapped, they are puzzled. The murder of Lars’ daughter and one of his employees makes solving the mysteries necessary. Can she learn before Lars becomes a victim.
Editorial Review
With every book, I think the Katherine Miller Mysteries can't get any better. I'm always wrong, because they always do. ~ Writer Gail Roughton

When I reached the turnoff to the street where Lars lived, the temptation to drive into the old town to explore clamored and was pushed aside. The constant complaints of the kitten added a discordant theme to Beethoven’s Fifth. Another day I would drive to town and browse in shops and visit the historic sites I’d read about.
Lars had promised a tour of the town and surrounding area. As I recalled his invitation, I smiled. “Can I tempt you to stay longer than three weeks? You’ll need months to see everything.”
I couldn’t stay. A young couple who were friends of mine had planned a February wedding. Since neither of them had a living mother, I’d been tapped to play a dual role—mother of the bride and groom.
The directions Lars sent took me into an area of large houses. Most of them were behind walls. I counted gates. Had he said four or five?                                                                                                                                                                   Then at the foot of the dead end street, I saw the sign. Casa de Oro. House of gold, indeed. Bonnie had chosen the name, but in a way it suited Lars. Years ago my husband had teased Lars about his Midas touch for nearly every business he touched prospered.
The gate stood open. I frowned. Lars had said I would have to announce myself and he would open the gate. I’ll surprise him, I thought, and drove into the compound.
At the top of the rise I saw the reason for Bonnie’s choice. Bathed in sunlight, the two-story house at the top of the rise appeared to glisten. The golden adobe wasn’t my destination. On the lower end of the horseshoe drive were two smaller houses.
The adobe with a long porch on the left side of the drive was Don’s. The H-shaped ranch on the right belonged to Lars.
Though Bonnie’s choice was above the gate, Lars’ name amused me. He called the estate Las Casas de Los Tres Osos. The houses of the three bears.
Laughter bubbled forth. Was I Goldilocks? Not according to my hair color. Mine is a rich auburn shade courtesy of my beautician.
I pulled into the carport beside Lars’ silver Mercedes, twin to the car he drives back east. The house seemed larger than my “Painted Lady,” circa 1890. The difference was that mine has two stories and an attic while this house is on one level.
With the kitten carrier in one hand and my purse in the other, I walked to the front door and rang the bell. To my surprise, the door was ajar.
When no one answered, I rang a second time. Where was Lars?
What now? My foot beat an impatient rhythm against the flagstone walk. The kitten cried and scrambled around the carrier making my hold iffy.
I pushed the door open. “Lars, I’m here.”
He didn’t answer. I set the carrier on the slate floor of the foyer. Since the door was open and his car sat in the carport, he was probably in the rear of the house or at one of his children’s. I returned to the car for my suitcases.
I left my luggage in the foyer and stepped into the living room. A portrait of my friend hung above the massive fieldstone fireplace. Several Navaho rugs hung on the cream colored walls.
Through the archway I glanced into the dining room. The table was set for one. The sight of a partially eaten breakfast sent fear surging through my veins.
“Lars, are you here?” My voice echoed in the deserted room.
What if he’s had some kind of attack? A stroke or his heart.
Those thoughts propelled me through the dining room and into the kitchen. I glanced into the pantry and stepped into the sunroom.
Lars, where are you? Had something dreadful happened? Was my visit responsible for his disappearance?
Don’t be a fool. The world does not revolve around Katherine Miller. He’s at Don’s or Bonnie’s.
Those thoughts failed to staunch my rising panic. Though I felt like an intruder, I made a quick tour of the house. I found three empty bedrooms, a deserted office, two powder rooms and three bathrooms, one for each bedroom. Nowhere was there a sign of my friend.
I returned to the dining room. The food was cold. A fork lay on the oak floor. What had happened here? Lars and I are in our sixties. He’s my senior by six months, but his health has always been excellent.
In the living room, I reached for the phone. Whom could I call? Other than Lars and his children, I knew no one in . I opened the directory. Were their numbers even listed?
My legs trembled. I sank on a chair and glanced through the bay window. Don and his daughter walked across the drive. I went to the door.

Posted by Janet Lane Walters at 6:36 AM

You sure built a lot of tension in this visit.