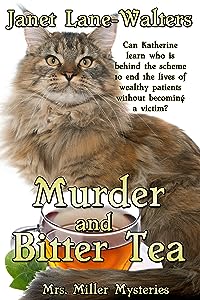 Join us at #MFRWHooks for some great book http://mfrwbookhooks.blogspot.com    Mine is Murder and Bitter tea. Katherine sets herself up as an undercover nurse at a nursing home for wealthy patrons.

Katherine’s newest tenant is estranged from her family and is the granddaughter of one of Katherine’s friends. When her friend falls and fractures her hip, the elderly woman is taken to Hudson House nursing home, an exclusive house.
Katherine’s friend becomes concerned about several recent and unexpected deaths. When she dies Katherine’s curiosity and suspicions send her undercover as a nurse. Soon she’s deeply involved.
Can she learn who is behind the scheme to end the lives of wealthy patients without becoming a victim?

I waited until after lunch to visit Martha at the hospital. As I walked down the corridor of the Surgical Unit, the familiar scents and sounds made me wish I was back in uniform. A very bad idea. I remembered what had happened when I resurfaced as a church organist. Maybe the desire to return was akin to an old racehorse wanting to take another lap around the track.
I paused outside Martha’s private room and listened for voices. Hearing none I wanted to avoid, I tapped on the partially open door. The nurse who appeared had been a colleague until she opted for private duty.
“Kate, how nice to see you. Heard you retired. Are you visiting someone?”
“Martha. We’re old friends.”
She shook her head. “Her son doesn’t want anyone other than family visiting. She needs to rest.”
“Think of this as a pastoral call. We attend the same church.” On occasion, I made hospital calls for our pastor.
“Katherine, is that you?” Martha asked.
“Yes.”
“Let her in. It’s vital for me to speak to her.”
Fran shrugged. “Go ahead. You can sit with her while I grab lunch. Her daughter-in-law was due to relieve me a half hour ago. Her son doesn’t want her left alone.”
To keep out visitors who didn’t meet his approval was my take on the order. “Thanks.” I entered and went to the bedside. “How are you feeling?”
“Sore. Dumb. Awkward. I’m glad you came.”
“Jenna says she loves you and she’ll find a way to visit.”
“Tell her to wait until I go to Hudson House. Marcus is so over-protective. When I’m there, he’ll know I’m recovering and he won’t worry so.” She clasped my hand. “Give me my handbag.”
I looked in the bedside stand and the closet. “Not here.”
Her forehead wrinkled. “That’s right. I had it put in the safe.”
Why hadn’t she sent her valuables home with her son? “I guess whatever you wanted to give me will have to wait.”
She nodded. “There are some things at the house I want you to remove.”
What’s going on?” I turned. Sophie Garner stood in the doorway. She flipped her long blonde hair over her shoulder.
“I’m visiting,” I said.
“Marcus doesn’t want Mother Garner disturbed. Did that stupid nurse let you in? I’ll see she’s fired at once.”
“You’ll do nothing of the sort.” Martha’s voice held an iron edge. “I pay her and if I think she deserves to be fired, I will. You’re almost an hour late to relieve her. Kate kindly volunteered to stay while the nurse had lunch.”
Sophie waved her red-tipped fingers. “Did you expect me to walk out on Linda Eliot? She’s a very influential person around the county.”
Martha snorted. “A newcomer with new money. The Garners have been forces to reckon with for over a hundred years, but you always did like flash.” She dropped her hand on the bed. “Don’t let her vulgar money sway you, but there’s no sense trying to make silk from trash.”
“How can you say that? I’ve given you two lovely granddaughters.” Sophie turned to me. “You can leave. When I tell Marcus you were here, he’ll be livid.”
“You’ll tell him nothing.” Martha glared. “Sophie, step outside. I want to speak to Katherine alone.”
“I will not.”
I clasped Martha’s hand. “It’s all right. I’ll talk to you later.”
Martha nodded. “Let my nurse know Sophie’s here and she has no reason to worry or hurry her break.”
“Will do.” I slipped past Sophie and strode down the hall. At the nurses’ lounge, I opened the door and passed Martha’s message to Fran.

BUY MARK
http://bookswelove.net/authors/walters-janet-lane-romance-fantasy-suspense-medical/
Posted by Janet Lane Walters at 6:38 AM

Wow, I'm currently querying with a mystery novel that also has a mystery at a nursing home! I'm sure everything else about our books is different though. :-)

You set up so many questions for us to puzzle over. What's behind Martha's family's extreme over-protectiveness? What does she want removed from her house?