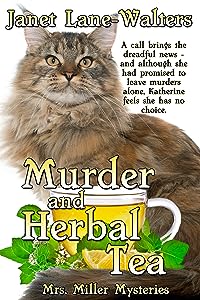 Join the great authors and read their excerpts here   http://mfrwbookhooks.blogspot.com       My Offering is Murder and Herbal Tea at http://wwweclecticwriter.blogspot.com

BLURB:
Katherine’s wedding day has arrived and she and Lars make their vows. When she notices one of her best friends hasn’t arrived, she begins to worry. Her friend owns a shop where tea and accompaniments are sold. Her friend’s partner is a micromanager. Katherine’s friend has wanted to dissolve the partnership. A call to the New England town brings the dreadful news of a murder. Kate’s protectiveness factor takes hold and she leaves a note for Lars and heads to rescue her friend. Though she has promised to leave murders alone, she feels she has no choice. Lars follows to help her solve another murder.


Murder and Herbal Tea by Janet Lane Walters
Genre: Cozy Mystery
Publisher: Books We Love
First Sentence: During the second week of June, Lars arrived in the Hudson River village where I live and where he had a home.
Review: Katherine, aka Kate, Miller is finally marrying Lars Claybourne. They barely tie the knot and Kate’s off to clear her friend, Joyce, of any wrong doing…even though all fingers point at her. (Without giving up any spoilers)
It’s serious charges against Joyce, and Kate’s all into figuring out what the authorities seem to be missing. Following her process of elimination down a twisty path of possibilities kept me on my toes, enjoyably so.
I read Ms. Walters’ book out of sequence, (this is book 5) not that you should read the Mrs. Miller Mysteries books out of order, but I was able to follow along with the story and character relationships flawlessly.
A happy ending always makes me smile, and Ms. Walters delivers. I recommend this book to anyone who’s into cozy mysteries where the story-star sleuth comes packed with personality plus; )
Susan


Who leaves her groom on their wedding day to solve a murder? Mrs Miller-Claybourne, that's who! And her readers are all the better for it! A tolerant and helpful new husband, a friend in need, cooked books, suspects galore, lots of delicious food, tea, and Victorian homes and shops settings make this a welcome addition to this delightful cozy mystery series. And policemen? When are you going to learn that condescending: "Leave detecting to me" remarks are just NOT WISE in the presence of our super sleuth??
EXCERPT:

Posted by Janet Lane Walters at 6:39 AM

As usual, you leave us on an unanswered question. I admire that ability, Janet. You are very good at writing hooks!

And now we see and smell the tea of the book's title.

could visualize the teapots and soldiers. nice work.