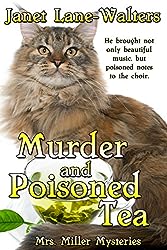 Visit me at http://wwweclecticwriter.blogspot.com and find a pathway to some great authors found here  http://mfrwbookhooks.blogspot.com Murder and Poisoned Tea is the second of the Mrs. Miller mysteries.

BLURB:
The moment she hears his mastery of the organ, Katherine covets him as St. Stephen’s new Minister of Music. Handsome, charming and vastly talented, the women of the congregation adore him. Even Katherine is swayed by his manners and ability, But Roger not only brought beautiful music, he brings poisoned notes to the choir. Katherine seeks to find the secret of why he has changed churches yearly. She prays the discovery will be in time to prevent a tragedy.
Review
The Mrs. Miller Mysteries series is a sheer delight. Miss Marple and Jessica Fletcher would love Katherine Miller. I know I do. ~~ Writer Gail Roughton

After rehearsal we adjourned to the reception room for coffee and heart-shaped cookies in honor of St. Valentine, my temporary position, and the choir’s monthly refreshment night.
I moved from group to group to chat with old friends and new acquaintances. The choir had divided into several cliques who acted like rivals for my attention. The new choir director would need better than average skills in meshing the dissenting factions.

The largest and loudest of the groups clustered around Judith Hanson. She sat on one of the brocade-covered chairs near the front windows and looked like a queen on her throne. The majority of the group was male. No real surprise. At one time or another, every male in the congregation, married or not, had flirted with Judith. Each had held her attention until she decided to blow them off with cruel remarks.

Her brown eyes slant, giving her an almost Oriental look. Straight dark hair cut to shoulder length added to the image. As she spoke, her hands moved in exaggerated gestures. A constant flow of kinetic energy crackled as she stroked the new tenor’s arm. He smiled.

Martin ended the moment of seduction by handing her a cup of coffee. Bearded, balding and overweight, he appeared to be a weak man, but beneath the surface lay a nurturing kind of strength. Did he mother his daughter as well as he did his wife?

Judith looked up at him. From across the room, I saw resentment on her face and in her body language. Her shoulders stiffened. Her mouth pulled into a tight line. Martin whispered in her ear. She nodded.

“Beth, Beth, darling,” Judith called. “Are you coming to the Pub with us?” Her shouted invitation rose over the hum of conversation.

Judith waved at me. “Come with us and get away from this stuffy crowd. I need a drink before I perish. The well’s been dry too long.” Brittle laughter followed her words.

Judith rose. “Spoilsport. Don’t worry about Marcie. She’d welcome an excuse to cut school. No music classes on Friday. If it weren’t for them, she’d be a drop-out.” She put a hand on Beth’s shoulders. “Take Mrs. Miller home and join us.”

“I’ll have a drink waiting for you. Maybe you’ll find a man.” She rubbed against Martin. “Three years since your husband’s death. I don’t know how you’ve survived. Men are so...so...”

Beth’s face flamed. She reached for her jacket. I put on my coat. Judith, Martin and several other people strolled from the room.

Beth shook her head. “I don’t know why I let her get to me.”

“She likes to watch people squirm. Don’t let her hurt you.”

“It’s not fair.” Beth grabbed her music folder. “She has a string of men. Maybe I hope some of her allure will rub off.”

“Have you ever watched a cat play with a mouse? That’s what she does. You don’t need her friendship.”

Posted by Janet Lane Walters at 6:54 AM