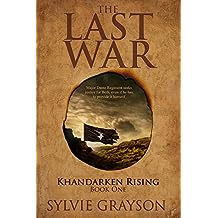 Khandarken Rising, The Last War: Book One
Major Dante Regiment must find a way to protect Beth, as the Emperor is not the only one causing chaos in Khandarken
The Emperor has been defeated. New countries have arisen from the ashes of the old Empire. The citizens swear they will never need to fight again.
Bethlehem Farmer is helping her brother Abram run Farmer Holdings in south Khandarken after their father died in the final battles. But when Abram takes a trip with Uncle Jade into the northern territory and disappears without a trace, suddenly things are not what they seem and no one can be trusted.
Major Dante Regiment is sent by his father, the General of Khandarken, to find out what the situation is at Farmer Holdings. What he sees shakes him to the core and fuels his grim determination to protect Bethlehem at all cost.

Son of the Emperor, The Last War: Book Two
From the mud and danger of the open road to the welcoming arms of the Sanctuary, from attacks by the dispossessed army to the storms of the open sea, Son of the Emperor takes us on a wild ride into danger and on to the dream of freedom.
Hunted by her stepmother, Julianne Adjudicator flees to the north of Khandarken and is welcomed into the Sanctuary, a place of refuge for women in a rough world where the dispossessed of The Last War rove the wilds of the countryside. But even there, she finds chaos and betrayal.
Abe Farmer seeks help for his badly wounded bodyguard at the Sanctuary but ends up leaving under cover of darkness with young Julianne in tow when he discovers the fate that awaits her there. Soon the trio attracts the deadly attentions of the New Emperor.
Can they reach the Catastrophic Ocean and safety before disaster strikes?

Truth and Treachery, The Last War: Book Three
When Emperor Carlton makes an offer, can Cownden Lanser refuse? Lanser has his own ambitions and Carlton may be offering everything he's dreamed of.
The Young Emperor has been backed into a corner. He holds a bit of land in Legitamia where he marshals his troops, but the skirmishes they've launched to expand his empire have had limited success. Now, his ambitions are aimed at overthrowing everything Khandarken has cobbled together since the Last War.
Cownden Lanser, Chief Constable of Khandarken, is a private man with a close connection to the Old Empire that he doesn't divulge to anyone. Although he's dedicated to his position, things are not what they seem in the rank and file of the police.
Selanna Nettles is a sookie, trained in Legitamia but working near her family in the Western Territory of Khandarken, healing the injured mine workers and the dispossessed. But her life takes a startling turn when Chief Cownden Lanser hires her to attend a set of high-level meetings in Gilsigg.
When these three meet up in Legitamia, the result is explosive. Not just for them but for the future of Khandarken. The Emperor makes Cownden an offer that might be everything he's secretly dreamed of. How can he refuse?
http://tinyurl.com/jt5qa68
https://www.amazon.com/Truth-Treachery-Last-War-Emperor-ebook/dp/B01HAQMTD2/

Posted by Janet Lane Walters at 7:07 AM