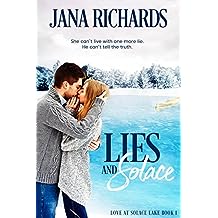 Lies and Solace - Blurb
She can’t handle one more lie. He can’t tell the truth.
Harper Lindquist is convinced she’s found the answer to her financial prayers. Unless she pours cash into crumbling Solace Lake Lodge, she’ll lose her family’s legacy. Her would-be savior arrives in the middle of a Minnesota blizzard and she’s determined to prove to her reluctant, and trapped, financier the lodge is a sound investment. But Harper isn’t completely honest with him. And she has no idea the lake is hiding secrets of its own.

Ethan James is a liar, but his money is very real. He isn’t convinced a broken-down inn is a smart investment opportunity. But the more he understands Harper’s dreams and desires, the more he wants to be the man to make them come true. The trauma in both their pasts means neither can fully trust the other. They must find the courage to love, to trust, and to accept, or yesterday’s sorrows will keep them apart.

Secrets and Solace – Book Two, Love at Solace Lake series - Blurb
No matter how deeply buried, secrets rise to the surface.
Scarlett Lindquist has agreed to help her sisters rebuild the dilapidated fishing lodge in Minnesota they inherited from their grandparents. Although the lengthy restoration is bringing the three sisters closer together, Scarlett’s support is temporary. Her leave of absence from her job in Chicago is temporary and she has no intention of staying at Solace Lake Lodge, where the lake holds dark secrets. When frightening childhood memories resurface, they are tempered by her fascination with an irritating contractor. If only she could trust her feelings for him. If only he could trust her.

Cameron Hainstock meets Scarlett at his brother’s wedding to her sister and their attraction is instantaneous. But Cam avoids the beautiful marketing executive. All his efforts are aimed at battling for custody of his only child. When the unimaginable happens and Cam faces the biggest challenge of his life, he’s reluctant to accept help to halt his downward spiral. Can they learn to trust each other and fight for a future together or will they go their separate ways?

Truth and Solace– Book 3, Love at Solace Lake series – Blurb
The truth could destroy them. Or set them free.
Maggie Lindquist left Solace Lake determined never to return. Circumstances have pulled her back and she’s helping to restore her family’s dilapidated fishing lodge. When she agreed to the plan she didn’t expect to have to work side by side with the man who abandoned her ten years earlier. She didn’t expect to like him, or want him ever again. But can she trust him as she once did?
Luke Carlsson rushes home to tend to his ailing mother. Her lengthy illness means he needs to stay, at least temporarily. And to stay, he needs to work. Solace Lake Lodge offers him a job and an opportunity to work with the woman he’s never stopped loving. But the restoration is unleashing secrets hidden for decades and no one is left unscathed. Especially not Maggie and Luke, whose love needs to be resilient enough to forgive, and strong enough to build a future together.

Posted by Janet Lane Walters at 6:41 AM