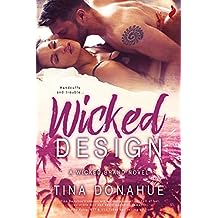 just got a helluva lot steamier… During the day, the staff at Wicked Brand makes ink dreams a reality for their appreciative clients. After hours, this naughty crew engages in sensual delights as wild as the designs they’re selling. Their motto? Nothing forbidden. Nothing held back.

Clover wants Van Gogh. Bad. He's the hottest ink artist at Wicked Brand and makes her blood race. Trouble is, he hasn't noticed her. She's determined to change that. Starting with letting him get under her skin—literally. But then the tattoo consultation goes a little deeper than expected.
In a night of wicked hot fun, she brings out his sexy beast. Talk about a major transformation. Soon they're sneaking into the shop after hours to play with his chair and breaking in his new handcuffs. But when their differences start to arise, she's not sure where all this hot sex will lead...

Posted by Janet Lane Walters at 6:40 AM