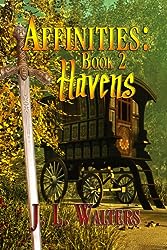 Today my post is Havens second book in the Affinities series. Captured children need help to aid their escape.  Join me and other great Authors here http://mfrwbookhooks.blogspot.com

Blurb:
The four teens, led by the mysterious birds they believe are their parents seek a place of safety where they can learn to control their affinities. They find a place of refuge with Doma Jandia, grandmother of their friend Zand. The doma plans to take them to the highlands but news of the capture of two of their friends by Dom Senet, sends them on a rescue mission. Their powers are not strong enough to defeat the evil dom. They must find a way to succeed or their friends will be corrupted forever.
Available from Books We Love
JL Walters – Affinities Series
Affinities Book 1 – Escape
Affinities Book 2 – Havens
Affinities Book 3 – Searches
Affinities Book 4 – Confrontations

Do not miss this exciting and dynamic series. An escape for young adults as well as adults with a passion for fantasy. Janet Lane Walters creates world like no other writer I know.

Alizand prowled about his bed chamber.  He paused beside the window and pushed the heavy draperies aside.  Another day of confinement.  Since the day his step-brothers had invaded the suite, forcing Alizand to reveal his affinity for Fire, he’d been a prisoner.
At least the guards at the door believed he couldn’t leave.  They didn’t know about the hidden sections and the secret rooms and passages to be found beyond the walls.  Though Alizand could slip away, he should wait until night lest his room be checked.  Dom Senet often made random visits during the day.  Only when Alizand’s personal guard appeared could he escape these chambers. The corridors and places he could go had to be kept secret.
He was bored.  He even missed the tedious lessons he’d been given by the clan elders during the short time he’d been acknowledged as his father’s heir.  Having his affinity exposed had ended the dream of being deemed fit to become a prince.  No one who could use one or all of the elements could rule the princedom of Wesren.
He stared at the tray on the table.  A maidservant had delivered the food a short time before.  Though he had eaten nothing since yesterday’s midday meal, he had no desire to break his fast.
The back of Alizand’s neck prickled.  Trouble approached.  Which of the many enemies he’d collected in his fourteen years of life came to upset his day?
The door opened.  Before the guard could announce the visitor, a tall man entered.  His ash blond hair hung in a single braid.  Black leather riding clothes gleamed in the light from candles set in glass-shielded sconces on the wall.  His dark green eyes sought and held Alizand’s gaze.
A smile appeared on Dom Senet’s face.  Alizand felt like a tabby surrounded by a pack of ratis.  He forced himself to breathe.  How could one man raise such a high degree of terror?  Though Alizand’s legs felt unsteady, he forced himself to remain on his feet.
“Dom Senet.”  A sense of pride filled Alizand’s thoughts.  His voice hadn’t cracked or risen to a high pitch to reveal his inner quaking.
The dom stroked the multi-colored gem he wore about his neck.  The gold chain glinted.  “I have questions for you to answer.”
Questions, Alizand thought.  What kind of trick was this?  He couldn’t relax his barriers or forget his suspicions of the dom.  Was this a new way to fool him into becoming the dom’s puppet?  Alizand needed to respond.  To remain silent would expose his fear.  “What do you want to know?”
“About your kin, the children of your father’s step-brother.  I have a great need to find them.  Poor lost children who need a home and a guardian.”
Alizand’s hands clenched.  His friends had saved his life when he’d been injured in the aftermath of the destruction of the henge.  With them, he’d been Zand, a person and not a creature to be used.         “I don’t know where they are.  I told my father I didn’t and I say the same to you.”
“I think otherwise.”  The dom moved closer.
Alizand clung to his determination to resist.  He felt icy touches trying to push beneath his surface thoughts and invade his memories.  He pressed his hand against the gem beneath his tunic and strained to hold firm against Dom Senet’s invasion.  “How could I know where they’ve been or where they’re going?  I’ve been a prisoner here for weeks.”

The line that really stood out to me was: "Which of the many enemies he’d collected in his fourteen years of life came to upset his day?" It made me wonder about what kind of life he'd led to collect enemies at such a young age.

Good job on capturing the thoughts and attitude of an adolescent boy grappling with both responsibility and uncertainty.