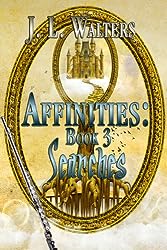 Join me and other authors and read about some interesting books. http://mfrwbookhooks.blogspot.com
Mine is book 3 of the Affinities series.

BLURB:
Having found a safe place in a tower fortress, the four and their companions set out to find what they need to defeat Dom Senet and He Who Walks With Evil. They divide into three groups. The first group seeks the focus stones that enhance their affinities. The second group looks for the remaining artifacts, the swords, the staffs, the flutes and the scrying bowls. The third group sets out to find those with their affinities to round the groups to four of earth, four water, four air and four fire. Their strength will be needed in the final battle.

The midday sun of the late summer day beamed on the caravan consisting of three Rover wagons, several extra coursers and eight riders. Val tugged off his neck cloth and wiped his sweaty brow. Today he rode as rear guard and used his affinity for Water to search for emotions that spoke of strangers. As yet, the group seemed to be the only travelers for miles.
He scanned the horizon. The grassy plains stretched to the east and the west of the old rutted road leading toward a distant grove of trees. The forest could hide attackers, but as yet he sensed no unknown enemies.
The heavy loads stored in the wagons caused the slow progress. Val had to admit Doma Jandia was the best trader he had ever encountered. Not only did they have extra mounts there was enough food and grain to last a month or more along with the tools they needed to repair the abandoned keep. He grinned. They still had credit with the Rovers.
An outburst of angry emotions impinged on his peace. Val’s hands clenched. Four days of travel beneath a hot sun had brought tempers to the fore, especially from those whose affinity for Fire guided their actions.
Ky and her courser tore toward him. With one hand she held the reins. The other hand held a raised sword that blazed with flames. Behind her, Zand galloped. His sword showed a plume of fire. “Take that back,” he shouted.
Val rode toward the pair. “Enough,” he cried. “Dampen those flames. Do you want to set the grass aflame and endanger us all?”
“She called me a baby,” Zand said.
Val sucked in a breath. “What did you say to her?”
“That I was better with a sword.”
Val nodded. “Since you have been practicing with one since you could hold a blade, how else could you be? I say you’re both acting like children.” In some ways they both were, not only in age but in experience. “Why don’t the pair of you spar after evening meal when Dragen can watch and comment?”
The flames on Ky’s sword died. She turned to Zand. “A good idea.”
“Just blades. No flames,” Zand said.
The pair wheeled and rode off. Val watched them go. Sometimes he wished he could use his affinity for Water to empty a cloud on his friends’ heads. A longing for shade and coolness arose. Would they reach the trees in time to make camp for the night?
Why were there no farms or villages in this area? Was this part of the highlands? He knew the Rovers’ camp was in the neutral ground between the lowlands and the highlands. How much further must they travel to reach the deserted keep Dragen knew? The abandoned dwelling was to be a refuge where they could learn to use their affinities. This meant another change in his life.
His thoughts slid to the many times his life had undergone an upheaval. He had no recollection of his mother’s death and few from the years he and his father had lived off the land before joining the Rovers for several seasons. Those days had been ones of learning and of belonging.
Then his father had been drawn to Cedris. Flashes of memories from the day his father had died at the hands of Dom Senet made Val’s hands shake. He pushed his grief aside and tried to smooth the raw places.
One area remained abraded. He knew the children who had lived with him in Cedris were safe with the Rovers. They had been his family until his affinity had forced a chasm to separate them.
A shudder rolled through his body. A member of his adopted family had envied his talent. Had that been the reason for Larkea’s betrayal or had her dislike of Geni spurred the angry reaction? Larkea’s actions had resulted in his and Geni’s capture by Dom Senet and had placed all their friends in danger. When he recalled the coldness of the dom’s green eyes, Val felt ill.


http://bookswelove.net/authors/walters-janet-lane-romance-fantasy-suspense-medical/
Posted by Janet Lane Walters at 6:42 AM

I like this line: He pushed his grief aside and tried to smooth the raw places.
I get the feeling they weren't just physical places but also deep emotional ones.

I enjoyed how his affinity for water allowed him to sense emotions.