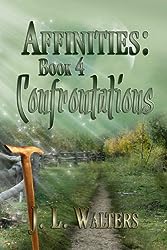 My offering today is a fantasy for young adults and all ages. Join me and other great authors and explore some new reads here   http://mfrwbookhooks.blogspot.com

BLURB: Ash, Bran, Ky and Jay along with their friends have now mastered their affinities. They now control their ability to use Earth, Air, Fire and Water. The time has come for them to face Dom Senet and He Who Walks with Evil. They have learned a disturbing fact. He Who Walks With Evil is able to exchange an old body for a new one. Dom Senet wishes to obtain the secret and he is willing to sacrifice even his own son to gain this power. The four sets of companions set off to rid the doms and domas of Dom Senet’s bonds and to defeat the two evil men. Can they or will they become pawns to evil

Excerpt:
The time has come. Ash bolted upright. Her heart pounded with a beat reminiscent of one created by a mad drummer. Her gaze swept the room. She saw the other young women slept. Had someone spoken on the winds or had the words been part of a dream she couldn’t remember? When her racing heart slowed she cautiously opened her senses to read the winds of the keep. Using her affinity for Air she searched. The only person awake was the doma and the cry hadn’t arisen from the elderly woman.
Fingers of moonlight slid through the shuttered windows. She moved to the edge of the bed and pushed her feet into her house boots. Ash crept to the window to peer outside. She knelt on the stone bench and opened the shutters a crack. A gasp pushed past her lips when she saw the birds, one light and the other dark. The pair circled the keep.
She rubbed her arms to banish the chill of the late winter night. “Mama, Papa,” she whispered. “What does your arrival mean?”
Since the destruction of the Wesren henge the birds had appeared at auspicious moments. Sometimes the pair signaled safety and other times they brought a warning of danger. What was the meaning of this sighting?
“The time has come.” Softly she whispered the words. Like a jolt of lightning a thrill of excitement swept through her. Did that mean her and her halfling companions were ready to leave the safety of the keep and venture forth against their enemies? There were more opponents than she cared to face. She considered the number of doms and

Posted by Janet Lane Walters at 6:34 AM