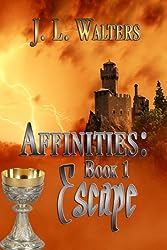 Join me and some fabulous authors for some interesting ready. My book is a fantasy.  http://mfrwbookhooks.blogspot.com

Two sets of halfling twins, Ashlea, Brandien, Jaydren and Kylandra sent away from their home by their parents to protect them from trouble, search for mentors to teach them how to use their affinities.
Each of these young teens has an affinity for one of the elements. Ash for Air, Bran for Water, Jay for Earth and Ky for Fire. During the escape, they face many problems forcing them to use their affinities by trial and error. They also meet Alizand, the son of the ruling prince of Wesren. Zand has an affinity for Fire and this will keep him from gaining the rule.
Dom Senet, an advisor to his father, and once a friend of the quartet’s parents suspects Zand’s affinity. He wishes to corrupt the teen and use him to gain control of the four princedoms of the land and of the highlands. The evil dom has all four affinities. The four must reach a secret place and find teachers before the evil man discovers them

Excerpt:
A flash of lightning brightened the sleeping chamber. Ash woke with a start and burrowed into the pillows. The scent of trouble rode the air currents that threaded through the open window slats. Her heart thudded in her chest. Like the beating of a giant’s club against a massive drum, thunder sounded. Again, lightning flashed and cast green, red, white and blue slashes across the sky.
The air held no threat of rain. ‘Twas like the heat storms of summer, unnatural at this time of year, for the waning days of autumn marked the season.
Ash calmed her racing thoughts and tasted the air, for that was her element. A frown formed within and without. From the land beyond the four walls of the henge, she caught the odors of fires, animals and men. From inside the keep, there was little except the aromas of her parents and siblings. Something was wrong. Where were those who served the Dom and Doma of Wesren? Ash propped herself against the pillows. If she had her younger brother’s affinity for things of earth, she could read the stones of the ancient tower and know what had passed while she slept. Where were the men servants and maids? ‘Twas as though the henge had been abandoned by those who lived within the four walls.
The chamber door creaked. Ash froze until a familiar scent reached her. “Mama, what’s wrong?”
The Doma Calanda slipped across the room and sat on the bed. “Ashlea, still your thoughts.”
Ash struggled to obey the sharp command. Her mother seldom spoke this way. “Why?”
“Thoughts travel on the wind and may be read by those who wish us ill.” She grasped Ash’s hand. “Dress in your warmest clothes. As soon as you’ve finished, go to the inner room.”
The urgency in her mother’s voice raised fear. “What’s happening?”
“We’ve been betrayed. An army surrounds the henge. Your father and I believe the secret of the openings in the walls is known by those who seek to force us to use our powers for their ends.”
“Who has done this? Do I know the enemy’s smell? Have I seen his face?”
“Several years ago, your father’s step-brother came to the henge. He’s one of those who stand against us.”
Ash thought about her step-uncle. His face slipped into her thoughts. Prince Zedron had brought gifts for her and her siblings. He’d seemed nice, but she had a vague memory of hearing voices—his and her parents’—raised in argument.
Why would he want to destroy the henge? When Papa had shown affinities for the elements, he’d given up his claim to Wesren. Zedron of the House Wesren had been named prince. As well as being papa’s step-brother, they were distant cousins.

Posted by Janet Lane Walters at 6:30 AM

This sounds so serene and then evil and danger. I hope they escape.

She needs to run (and hide her thoughts - which would be tough under those circumstances)! Nice snippet.

I'm with Ed. Get going! LOL