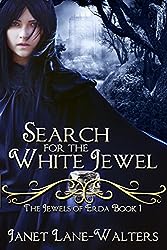 Today I'm joining some great authors in a blog hop. Jump aboard and find us here. Then read and enjoy    http://mfrwbookhooks.blogspot.com

Search For The White Jewel (Jewels of Erda Book 1)

BLURB:
When the Holder of the Yellow Jewel dies, her ward Liara believes she will become the new Yellow Holder. The dying word of the elderly woman astonishes the young woman. She will hold the White Jewel. This fabled gem has been lost for years since her mother and her sister fought and her aunt took hold of the Black Jewel.
Liara, accompanied by her foster brother set forth to find the jewel, escaping the soldiers sent by the Queen and Black Jewel Holder. During their escape, Liara meets Valmir who saves her and her foster brother during a shipwreck. During their journey, they meet other holders of the Jewels, including Reena, daughter of the now dead Queen. Though she has the Black Jewel, Reena has no idea how to use the gem.

The black-robed wizard slipped through the doorway leading to the Queen’s chamber. He paused and studied the wan woman propped against the black silk pillows. As he approached the bed, his robes rustled.
The Queen grasped the Black Jewel, symbol of her reign. “Be gone, I say. I have no need of you.”
“Your time has passed. ‘Tis time to cede the Jewel to your successor.”
“Not yet.” She raised the Black Jewel. Dark rays pulsed in its heart. “Be gone and let me be.”
He evaded the dark beams. “What of the White?”
She laughed. “Do you think I fear that thing? My sister failed to find the gem. For generations, there has been no sign of its existence. There have been but myths and rumors.”
He smiled. “The White stirs. I sought and I found.”
“Where?” Her eyes narrowed.
‘Tis where it has always been, waiting for the one who can hold the jewel. But fear not. ‘Tis not your battle. Soon you will be gone, and I will have the training of the one who is to follow you. This time there will be no mistakes. As Holder and , she and I will rule.”
“Be gone, dark wizard.” The Queen raised the Black and poured her anger into the gem. Thunder roiled the silent night and a great display of colored lightning brightened the sky above the palace.

From The Lore of the Jewels
In days long past, just after the world was formed and the people rose from the dust, Mother Sun and the Sister Moons beheld what had been wrought and were troubled by what they saw. For as people moved across the lands, chaos rather than harmony ruled.
“We must bring peace and order.” Mother Sun spoke to the pale reflections of herself.
From her depths, she drew molten elements and fashioned them into Jewels. The icy breath of the Sister Moons cooled the gems. To Earda, they were sent and for each Jewel, there was a purpose.
And from the hearts of the six Jewels, light radiated and coalesced to become the White.

Liara closed the Lore of the Jewels. Everyone knew the ruling Jewel was black. And the tale of how the gems were formed was naught but an interesting fable. Her foster mother had given her the book on her last name day. Tana’s insistence that she learn the legends puzzled Liara. What use were these mystical tales to one who might never hold a Jewel?
She heard a disturbance in the courtyard and peered through the open window. Several men dismounted. Their steeds were magnificent beasts with burnished horns. Who were these visitors? They looked to be men of importance.
Tana’s maid appeared in the doorway. “Milady Holder bids you remain in hiding until her guests leave.”
Liara sighed. Twice this lunar, visitors had arrived to see the Yellow Holder. Both times, she had been bidden to keep her presence a secret. Not that she minded missing lessons, of course. The complicated exercises in visualizing had no practical purpose she could see. What bothered her was not being allowed to sit in company and hear about events beyond the keep and the village.
Curiosity gnawed at her thoughts. In hopes of learning more about these unexpected visitors to the High Sanctuary, she hurried down the back stairs and lingered in the shadows near the postern gate. But the men had gone inside before she could hear what they said.


Excitement fluttered like the jeweled wings of a flitter. She was free, at least for the afternoon. She slipped outside and climbed the path beyond the walls of the massive stone tower. Then she broke into a run, deftly avoiding the roots of the gnarled, wind-shaped balsa trees.

Sounds to me that the black wizard has plans for Liara that may not be in keeping with her desires. Though it doesn't sound like it, I hope the white jewel can offer her protection from him.

What a wonderful beginning - pulled me in and made me want more :-)

Wizards, black and white . . . it would seem you should be able to pick up lots of LOTR fans!

Janet, this is so different from the other bits of your work that I've read. Really intriguing!