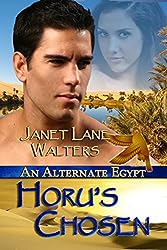 Joining other authors hopping from blog to blog and reading about some great stories.  Join me here.
http://mfrwbookhooks.blogspot.com

Seth, an undercover cop has been betrayed by his handler. To escape he calls a number on a flyer and is transported to an ancient Egypt he doesn’t understand. He must rescue the Daughter from the evil priests of Aken Re.
Merin is the Daughter. She must find the man who by wedding her will become Pharaoh. She plots to escape the priests of Aken Re and flee to those who years ago saved her life.
Can Seth and Merin find a way to defeat the priests? Is love the answer to their problems? Can they join with the Warrior of Bast and of Horu to bring unity to the Two Lands?

RT Review
Following on the heels of The Warrior of Bast, this story is filled with magic and fascinating characters. Those interested in ancient Egypt will find this an enthralling tale. A satisfying ending is presented for the hero and heroine, with a promising lead-in to the next story.

Seth slumped in the subway seat and shielded his face with a newspaper. Of all the luck. He was on his way to a meet with his handler and he didn’t want to be recognized. With care he moved the tabloid to study Tira. Panic showed in her expression. Perspiration dotted her forehead. Her tee shirt bore dirty smudges. She snatched a piece of paper from the seat beside her and seemed to study the words. As the car slid into the third stop she jumped to her feet and followed the crowd.
Another bit of bad luck. His stop, too. Just before the doors started to close he jumped out and headed up the stairs. When he reached the surface he searched and saw her running across the street. She entered the coffee shop. Strike three. That was the site of his meet.
Damn. Not a good idea to go inside. He would be late but late was better than made. Not that he didn’t trust Tira, but Ramos wanted her and the drug dealer had ways of making people talk. Tira’s sister had been a user and seller. Luci had angered Ramos by not paying what she owed and stealing drugs.
Seth slipped into a dark doorway and waited. Five minutes. Ten. At the fifteen minute mark Tira exited and stopped to use her phone. Moments later she dropped something on the sidewalk and hurried away.
Seth dashed forward and picked up the paper and read.
Life got you down? Have unsolved problems?
Looking for an escape? The answer is in your stars.
A counselor is available night and day.
Dial 1- 800- 555- ASTR


He read the paragraph again. Truth or scam? Had this piece of paper lured Tira into danger? Should he follow her? He frowned and peered down the street. She had vanished. When he’d warned her not to go home, he’d done more than he should have. But he liked her and knew she’d done nothing wrong. Her sister’s murder had put Tira in danger. The cops would have questioned and released her. Then Ramon would have stepped in. Seth hoped she had a safe place to hide. Holding this thought close he tucked the flyer in his pocket and entered the coffee shop.

http://www.bwlpublishing.ca/authors/lane-walters-janet-romance-fantasy-usa/
Posted by Janet Lane Walters at 6:43 AM

Thank you. Nearly finished with your book and I'm in love with Pietas

Don't stop as he enters the coffee shop - what happens next????