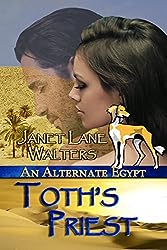 Blog hopping with some other fantastic authors today. Visit me and they discover the other authors.
http://mfrwbookhooks.blogspot.com

Amara faces trouble and she uses a phone number given to her by a friend who has vanished. When she is offered the chance to be sent to an ancient Egypt, she accepts even though she must perform a task and risk losing her life. But here, she faces the same fate. She arrives and there is much she must learn before she can rescue a young man held by the priests of Aken Re.
Namose was taken prisoner by Hebu, beloved of Aken Re, and forced to translate ancient scrolls giving Hebu some of the powers given to the priests of Toth by the Three of the Two Lands, Toth, Bast and Horu. After his rescue, further troubles arise. He and Amara must join their powers to save their land and friends from the evil Hebu.

The sound of feet on the stairs from below reached her. She crouched and peered through the railing. She sucked in a breath. Would her pounding heart shatter her ribs? Why was Ramos here? One of his bodyguards pounded on her uncle’s door.
When the men entered the apartment, she raced lightly up the rest of the stairs and opened the door to the roof. The heavy metal slab nearly slipped from her hands. She paused for a moment to use a piece of wood to block the handle. She ran across the roof. Once she reached the edge, she slipped over the low wall and placed her feet on the fire escape. Step by step she made her way down until she reached the fourth floor and the windows of her uncle’s living room. Had she missed anything of importance? The unseasonable heat of the autumn day meant open windows. She crouched where she could hear.
“Mr. Ramos, what do you want from me?” Her uncle’s voice vibrated with fear.
“I have come to offer safety for you, your wife and children. There will also be money allowing you to relocate.”
Ramos’ smooth voice sent chills darting over Amara’s skin. Her hands clenched.
“What do you want me to do?” her uncle asked.
“You have a beautiful niece. I have a handsome nephew who is my heir. Miguel wants the girl. Bring her to me and all will be as I promise.”
Would her uncle accept? Amara knew the answer. He had no love for her other than for the money she brought into the house. Her body tensed. The metal of the fire escape burned her hands.
“What if she won’t obey me? She holds herself apart from the family.”
Ramos laughed. “You will make her obey. Aren’t you the man of the house? Bring her to me. She was seen entering the building not long ago.”
When her uncle said nothing, Amara felt a moment of hope.
“I said now,” Ramos barked.
“But…” Her uncle rose. Would he tell the drug lord she hadn’t come home?
To keep from crying out, Amara bit her finger. Time to move. She had to escape but where could she go? When they didn’t find her in her room would her uncle remember how she often went to the roof? She eased to her feet. No time or way to reach her room and the stash of money she’d hidden. She needed a place to hide. With care she climbed to the roof and rolled over the wall.
After her breathing slowed, she searched her pockets. Phone. Twelve dollars, mostly singles and some change. The paper Seth had given her before he disappeared. If she ever needed an escape, today was the time. She read the words.
Life got you down? Have unsolved problems?
Looking for an escape? The answer is in your stars.
A counselor is available night and day.
Dial 1-800-555 ASTR


Was it possible? Though this sounded like a joke, Seth had said they would help. She trusted him. Did she have a choice other than to explore this option? If she didn’t call her life would change in a manner she feared most. She had to reach the street and make the call. Before making the call, she wanted to be away from this building. Maybe she could make the call now but the sound of banging on the door to the roof spooked her, She scurried across the roof. The next building was close enough to jump.

Posted by Janet Lane Walters at 5:44 AM

Love the tension in this excerpt. Intriguing setting and situation.
JQ Rose

Next building is close enough to jump!?!?! I wouldn't have the nerve. Good snippet.

Oh geez! What a cliffhanger! I'll be back next week. LOL