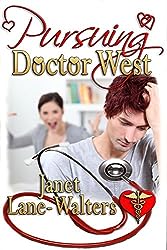 Come and blog hop with me to see what some great authors are sharing   http://mfrwbookhooks.blogspot.com

Michael West MD has a five year plan before he can consider making a commitment. He’s happy dating women who have no desire for a long-term affair. Encountering Zelda, the pest, the menace, the little girl next door who has impacted his life makes him want to run. She managed to ruin his senior prom and sent several of his dates running. Now she’s grown and the nurse manager of the surgical unit where he will see her every day. What’s a doctor to do but run?Zelda has loved Michael for year. She knows of the odd accidents her presence has caused him. After an encounter in the condo swimming pool, the accidents become hers but she refuses to give up her quest. The problem is his dating system. He seems to be on an alphabetical quest. He’s just met G and she’s Z. Can she find a way to turn his thoughts to her or must she give up her pursuit?

After stuffing the remains in the take-out bag, he slid from the sedan and brushed crumbs from his clothes. He scanned the lot. New car added to his list of wants. His fuel-economy sedan looked like a waif among the luxury sedans and sporty models. He strode toward the entrance.
“Michael, slow down.” The senior partner of the surgical practice waved.
Michael waited for Dr. Probst. “Good morning, sir. I didn’t expect to see you here so early.”
The gray-haired man smiled. “Always the first. Good to see you’ve the same habit. Three cases on the schedule. First one’s at nine.”
“Will I assist?”
“Eager to get your hands in?”
Michael grinned. “Sure am, sir.”
Dr. Probst chuckled. “How well I remember those days. Before we head to the OR, we’ll make rounds. I’ll show you the surgical unit.”
“Sounds good.” Though he had visited the hospital when he’d been recruited, he hadn’t been impressed with the unit.
“We’ve a new nurse manager. Young, efficient. Has performed miracles during her five months in charge. She’s cracked down on the staff. You’ll like her.”
Michael studied the older man. Was he being set up? Not going to happen. Casual affairs were his speed. He thought about the nurse manager he’d met when the guys in the practice had wined and dined him. She’d been old, steely-eyed, with a thin-lipped smile, making him think young doctors were to be trained like puppies. Young might mean any woman under sixty. If the new nurse manager was attractive and would be interested in a fling in the company of a man with a five year plan, he might give her a try.
They rode the elevator from the basement to the second floor. When he saw the nurse at the counter with a phone in her left hand and her right poised over a keyboard, he halted and fought the urge to run.
“No.” He groaned. “Impossible.”
“Something wrong?” Dr. Probst asked.
Michael cleared his throat. Don’t be an ass. “I never expected to see…” Help! His inner voice shouted the final word of his nightmare.
“Zelda, come and meet the new addition to our group.”
Michael sucked in a breath. The bane of his youthful existence left the computer and sauntered toward them.
His throat constricted. His gut churned. “You work here?” Duh. Could his foot fit any tighter in his mouth? Why else was she dressed in a white uniform? And the lab coat spelled administration. He took a second look. The uniform fit her slender body to perfection.
Dr. Probst beamed. “Guess you know each other. Zelda is our miracle nurse manager.”


Figured she would find a way to plague him. He didn’t like the ideas swarming like gnats in his thoughts. He batted them away. Sure, Zelda was attractive and probably efficient, but she was a cyclone centered on destructing Michael West MD. Like visions seen by a drowning man, incidents flooded him. She had swamped his high school romance with Allie, and sent depth charges into his summer fling with Bette.

This reads like it is going to be fabulous.

This cyclone is about to make his life interesting. LOL