Just a Few Lines from Shadowed Heart by Hazel Statham


A Few Lines from Hazel Statham

Today, a few lines from His Shadowed Heart by Hazel Statham.

The shadows of the remaining light played across Caroline’s sleeping countenance and he smoothed a lock of hair that had strayed across her forehead. He knew the desire that his lips should follow his finger’s course, but even in his state of inebriation, he knew this would be foolish.

For several minutes, he watched his wife sleep, eventually placing his head upon the pillow beside her. His lips curved into a loving smile as his eyes drank in her sleep-softened 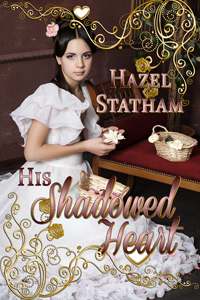 countenance and he felt her breath caress his cheek. The longing to hold her became an almost physical thing and his arms ached with the suppressed desire.


Eventually she stirred, muttering incoherently in her sleep, and he raised himself up. *What foolishness is this*, he thought. *I am acting like a callow youth, *and immediately he was on his feet. Snatching up the light, he went quickly out of the room, closing the door quietly behind him.

Come back next week for a few lines from Betty Jo Schuler.

Posted by Janet Lane Walters at 8:23 AM