Just a Few Lines from China Blue by Kat Attalla

This week, a few lines from Kat Attalla's China Blue:

At eight p.m., he drove to the camp. The dark skies overhead made it seem later than dusk. Just to make sure he covered his bases, he ran his Jeep off the road in a ravine deep enough to need a tow-truck to get out. By the time he reached her Craftsman house, he was soaked to the skin. Damn! He never thought a summer rain could be so freaking cold. A woman who fed the squirrels and birds would not turn her back on a stranded motorist. Would she? 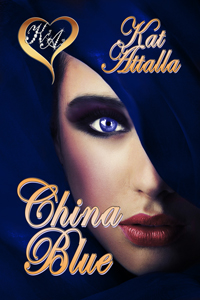 He knocked on the door and waited. The air rumbled with a distant thunder. In the past decade, he had thought about her many times: The sad young girl with the magnificent eyes. So he wasn't prepared for the woman who opened the door. Her eyes were that same bright blue, but the rest of her bore little resemblance to the skinny teenager in that hospitalbed. Her hair had grown back and fell below her shoulders in thick black waves. Denim jeans molded long legs and a fitted tee shirt revealed a hint of cleavage at the scoop neck. But her most striking feature was the rifle cradled in her arms.
http://bookswelove.net/attalla.php
Please stop back next week for a few lines from Hazel Statham.
Posted by Janet Lane Walters at 6:26 PM