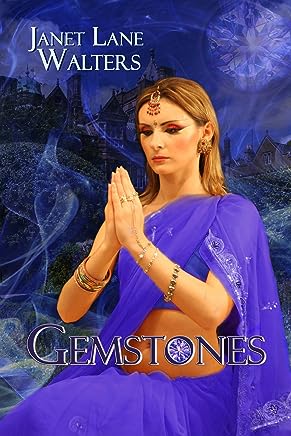 Join the writers at #MFRWHooks  Here  http://mfrwbookhooks.blogspot.com  For some great excerpts. Mine is from Gemstones

BLURB:
When Nicola Gordon and her younger sisters travel from India to England, she goes to a marriage she doesn’t want.
Drew Barlow has no desire for marriage, but his distant cousin and Nicola’s grandfather, ran the estates into debt. Drew agrees to the marriage for the money and to please the Dowager, Nicola’s grandmother, but he has no trust for women or for love.
When the two meet they clash and come together, igniting a blazing attraction they cannot resist.
Janet Lane Walter's latest book Gemstones is a stunning tale of the differences between two cultures, English and Indian, and what occurs when two different cultures clash. After the death of her father, eldest daughter Nicola Gordon must take charge of her family, fifteen-year-old Elizabeth, a budding flirt, and ten year old Margaret, a hoyden of the worst degree.

Format: Kindle Edition
Gemstones by Janet Lane WaterIn July 1810, Nicola Gordon’s father has been fatally wounded. Before he dies, he gives her a pouch of gemstones, one of which is the third eye of Siva (whose name is usually spelt Shiva) a sapphire. An expert on gemstones, Nicola is forced by circumstances beyond her control to flee to England with her sisters, where a warm welcome from their grandmother awaits them, and agree to a marriage of convenience to impoverished Drew Barlow, Earl of Denmere.The earl, who has no reason to trust women – including his mother, an adulteress - marries Nicola for her fortune and to have an heir. Appointed her two sisters’ guardian in their father’s will, he is determined to be in complete control of his wife, his wards and his estates.As time goes by Drew lusts over Nicola and she compares him to Siva.Unfortunately, Nicola compares Drew to Siva when she sees Drew’s muscular body and brown skin.Nicola grew up in India. She would have known that Siva’s skin tone is very pale blue. Apart from this moksha – liberation - is referred to as muksha. Also, I suspended belief when a reference is made to Nicola’s Indian teacher introducing her to a study of the kama sutra an ancient Sanskrit guide to sex. I could not imagine a young memsahib – no matter how indulgent her father was – being permitted to study it.However, I think readers who enjoy unusual, sensual novels, with engaging characters will enjoy Gemstones, an amusing romp.

Format: Kindle Edition
Gemstonesby Janet Lane WaltersNicola has been raised in India but when her father passes, she must seek out marriage to protect her sisters and herself. Drew has his own demons. His childhood shaped the man he’s become. Forced to marry for money, he is pleased with a match with Nicola. Unfortunately, their pasts get in the way of their happiness and future.The dramatic storytelling of British society against the backdrop of a young lady who is experiencing it new, draws the reader deeply into the tale. Nicola is intelligent, witty, and a take charge person. Yet, she’s insecure, unsure of her decisions and impulsive. All things that make her “real”. Readers will want to shake the characters at times for not finding time to talk or share their feelings but when they’ve had such upbringing, it’s understandable and lends more passion to the story.Ms. Walters shows a deep knowledge for the culture of India and gemstones in this story as she weaves a masterful tale of two people who need to be loved. I wasn’t able to put the story down.

Format: Kindle Edition
Wonderful quick read. Characters are realistic and personable. Easily understood introduction to Indian culture and gods. Quick moving storyline. Not too wordy. Perfect length. Descriptions of time period, costumes, life, and cultures were great. I really liked this author's work. Will definitely look for her other books.

Format: Kindle Edition
This was a good read! It kept your attention. You loved the heroine and appreciated all she went through. I love the happy endings :)

Format: Kindle Edition
i enjoyed this book. it was fast paced and fun. characters were believeable. i would enjoy reading books about the sisters also.

Format: Kindle Edition
Well written novel at an excellent price point. Not trashy and has an excellent storyline that keeps you interested until the last possible second.

"Miss Nicola. Miss Nicola."
The whisper woke Nicola Gordon. Like wasps around ripe fruit, tales of native uprisings swarmed in her thoughts. She groped beneath the pillow for the knife she kept there.
The girls. She had to protect her sisters.
"Miss Nicola, wake up."
"Who?" She tried to keep fear from clogging her voice.
"Sarad."
"What are you doing here? Where’s Papa?" Just two days ago, she had seen her father and his young
native assistant off on a buying trip. Fear gripped her spine. The knife fell from her fingers.
"Your father. You must come."
"I can’t leave my sisters. What if they wake and find me gone?"
"They will be safe. Your papa needs you. We were set upon by thugs and he was hurt. I found a safe place
for him to stay until I am sure we were not followed."
Nicola pushed aside the netting that enclosed the bed. She found her shoes and grabbed a dark cloak. Her heart thudded in her chest. Though she and Sarad had engaged in mischief years ago, her childhood friend had become sober and responsible. So had she.
"Where is he?"
"The place is not far." He slid open the door to the verandah. Nicola followed him to the gate in the
compound wall. The aroma of wet earth rose from the garden, but outside the gates, the recent rains had failed to mask the scent of exotic flower and spices of the odor of garbage. The absence of the moon created an ominous darkness. She hurried through alleys and along streets beside her silent guide. Her thoughts conjured a thousand tragedies.
She stumbled. A groan escaped.
Sarad gripped her arm. "Be silent as the tiger stalking prey."
His warning chilled her. Who knew what would happen to an Englishwoman caught in the streets at night.
Ahead, she saw the looming shadow cast by one of the city’s many temples built to honor one of India’s multitude of gods. Why had they come here?
Sarad pulled her into a dark passageway that led into the temple. Their passing stirred the dust of the ages, musty and dank. Finally, they emerged in a torch-lit room. She followed her friend to a recessed alcove.
"Papa!" The blood-stained bandages around his chest and head alarmed her. "Papa, oh, Papa." She knelt
on the stone floor beside him.
His dark eyes were unfocused. His skin felt hot.
"The eye. Siva. The eye."
"I don’t understand."
"Nicola. Must warn. Must tell."
"She is here, Sahib Gordon."
Nicola gripped her father’s hand. The flickering torchlight revealed his pain-filled features. "Papa, I will take you home and see to your wounds."
He took a shuddering breath. "Must leave Calcutta."
"Where will we go?" She couldn’t think of leaving. Calcutta was home.
"To England. Ian Grey will send an escort." He gasped a breath. "Your grandmother and Denmere. Old Earl dead. Marry the new. Distant cousin."
His words shocked her nearly as much as her memories. "My grandmother did not protect Mama. I don’t
want to marry and live with strangers." Why was he saying this? He would get better and until then, she
could care for her sisters. For ten years, since her mother’s death, this had been the case.
His fingers tightened around hers. "You must. Danger for you. For sisters." He struggled to sit up. "Your knowledge. Gems."
Fresh blood seeped through the dried stains on the bandages. "Rest, Papa." Tears rolled down her cheeks.
"I cannot leave you."
"Protect sisters."
She chewed her lower lip. "I will keep them safe."
He sank back. "Promise. Marry Denmere."
She couldn’t say the words. "Papa."
He pressed a velvet pouch into her hand. "For you and sisters. Not Fergus. Now go."
Though she thought about disobeying, she kissed his cheek. As she and Sarad left the alcove, tears cascaded down her cheeks and blurred her sight. She stopped to wipe her eyes and stifled a gasp.
Torchlight illuminated statues and wall carvings of men and women engaged in activities she had read
of in the Sanskrit manuscripts her teacher had given her. Her eyes widened in astonishment. She hadn’t believed the human body could assume such convoluted positions.
Sarad grasped her arm. "We must go."
His whisper broke the spell. She tore her gaze from the figures that fascinated and repelled. Her cheeks burned as though she stood beneath the mid-day sun. She followed Sarad into the dark passageway.

Posted by Janet Lane Walters at 7:05 AM

Janet, when I look at your excerpt, it's cut off on the right.

A shame, because it seems really emotional.