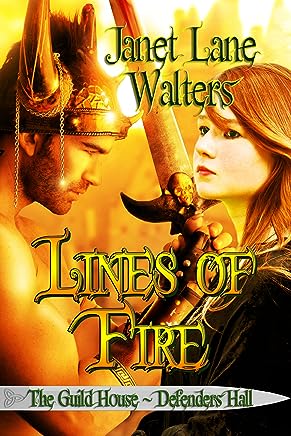 To honor a promise made to his dying father, Alric trains as a Defender. For some reason the Swordmaster wishes him gone and his first two bondings end in failure. A failed third one will see Alric banished. His meeting with the older daughter of the Swordmaster reveals a double heart bond, but she has been promised to Petan, the Swordmaster’s favorite. A duel is fought and though Alric can read Petan’s lines of fire, the other dueler cheats and nearly kills Alric. Petan is banished but he knows secret ways into Defenders Hall. Kalia, his now bondmate’s lines are tarnished. Not only do Alric and Kalia need to find Petan, they must learn how to cleanse her lines

Format: Kindle EditionVerified Purchase
This was a good story. I liked the characters and the world created. The "lines of fire" was an interesting concept. I especially liked this idea and how it was revealed and used within the story. However, this book could have been so much more. I would have liked the characters to be fleshed out more and with greater emotion. It needed more explanation of the background details. Sentences were choppy and hard to follow at times. Characters had little physical descriptions and that drove me crazy as I always work to create a picture of them and the world they live in as I read. Truly, this is a good story and a good read. I do recommend you read it.

DJCracovia
5.0 out of 5 starsHere's a hero you can fall in love with
July 19, 2014
Format: Kindle EditionVerified Purchase


Everything you would expect from a Paranormal romance.
Posted by Janet Lane Walters at 6:59 AM