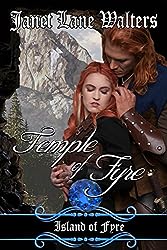 The excerpt is PG but the book is spicy.

Today I'm joining other authors here #BookHooks My selection is The Temple of fyre a fantasy romance. I'l sure other authors will have great books to show off. find them here,  http://mfrwbookhooks.blogspot.com

Blurb:
Sold by her family to the priestesses of the Temple of Fyre, Ria soon masters using each of the four fyrestones, white, yellow, orange and scarlet. Her curiosity leads her to the archives and there, she learns things that disturb her. There are no men serving as priests but in the past there were. Men are kept in the harras where the priestesses visit. On the day of her testing she is ordered to perform a task she dislikes and refuses to destroy a town. Many of the priestesses fall into unconsciousness. Melera, the chief priestess, beats and banishes Ria for the carrion crows to consume.Ari was abandoned as a child and found by two elderly firestone miners. He has pursued this and is the best of the finders. He goes to the temple to sell the stones he has gleaned. On leaving, Ria attempts to steal the fyrestone he has worn since the day he was found. He thinks she is a boy and a thief and he takes her to his room at the inn. On discovering her identity, he refuses to turn her over to the priestesses and they leave town. They are searching for the fabled blue fyrestones. They also learn to use them they must be bonded physically, emotionally and spiritually. Can they learn to master the blue stones and defeat Malera so they can rule the temple with love and understanding?


At first, those words had brought Ria pleasure and a sense of smugness. If all the acolytes in the temple, she was special. Lately, she’d begin to question her mentor’s motives. Ria remembered no call. All she knew was her betrothed had died suddenly, and the next day, her clan had sold her. Had Malera sent the slavers?

Buy Mark
http://www.bwlpublishing.ca/authors/lane-walters-janet-romance-fantasy-usa/
Posted by Janet Lane Walters at 6:46 AM

You said the excerpt was PG, but I'm not so sure of that. With all that talk of fire, the excerpt seemed pretty hot.