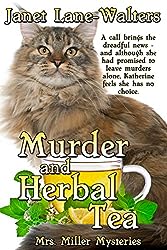 On her wedding day, Katherine leaves to come to the aid of a friend and her new husband follows avoiding the second wedding reception.

Katherine’s wedding day has arrived and she and Lars make their vows. When she notices one of her best friends hasn’t arrived, she begins to worry. Her friend owns a shop where tea and accompaniments are sold. Her friend’s partner is a micromanager. Katherine’s friend has wanted to dissolve the partnership. A call to the New England town brings the dreadful news of a murder. Kate’s protectiveness factor takes hold and she leaves a note for Lars and heads to rescue her friend. Though she has promised to leave murders alone, she feels she has no choice. Lars follows to help her solve another murder.Editorial ReviewLong-time beau Lars has finally convinced Katherine Miller to become Katherine Claybourne. But fans won't be surprised that even on her honeymoon, Kate can't stop herself. She's a magnet for murder. ~ Writer Gail Roughton

Lars and his youngest son waited at the front of the church. Edward entered. The music changed to the hymn from Finlandia. The ushers, Lars’ older sons, opened the doors.
“Show time,” I whispered.
Andrew and I walked down the center aisle. The pews rivaled a holiday service. Friends, neighbors, relatives, acquaintances and strangers who must be Lars’ business associates lined the pews. Andrew and I reached the railing before the altar.
Lars clasped my hand. The ceremony began. Before long we exchanged vows and the rings Maria had designed for us. Lars kissed me.
“That’s a wrap,” he whispered.
I held in my laughter.
Edward stepped from the podium and clasped our hands. “I present you Katherine and Lars Claybourne.”
The recessional began. Instead of walking down the aisle, Lars and I led the way to Fellowship Hall where the Women’s Guild had prepared the first reception. Wine, iced tea and coffee and fruit punch were served along with finger sandwiches and other appetizers. Two five tier cakes stood on a table, one iced with white and the other one of my chocolate cakes. Lars and I stood at the door to greet the guests and hear good wishes.
As the line grew shorter I realized Joyce hadn’t arrived. Worry stuttered through my thoughts. What had happened? Traffic. Construction. An accident. Illness. Brenda.
Lars clasped my hand and startled me. My fears for my friend remained strong.
“What’s wrong?” he asked.
“Joyce didn’t come.”
“I’m sure she left a message for you. We’ll learn when we go for your luggage. It’s time to taste the food and cut the cakes. On our way to , we’ll stop at her house.”
His belief in a logical explanation brought a moment of relief. We reached the buffet table where Lars filled two plates with an assortment of tidbits. I tasted a slice of brie topped with sliced strawberries and put the plate down. Though I’m sure the food was delicious concern for my friend killed my appetite.
When Lars finished sampling every offering, we cut the cakes and fed each other a small piece. A flawless tasting. Both cakes were terrific. Two of the Guild women cut the bottom layers cakes into slices for the multitude of guests. The two middle tiers would be taken to the restaurant for the second reception. The top ones would be boxed for Lars and me.
Edward strolled toward us. “Katherine, Lars, what a fabulous celebration. The cakes are fabulous but of course I’m partial to the fabulous chocolate confection. Did you make both?”
“Just the chocolate.” My smile threatened to morph into giggles. Fabulous must be his word of the day.
“Lars, a word in private. I’ve had a fabulous idea.”
Before I could protest he drew Lars away. Moments later two of the Elders joined them. The four walked toward the door leading to the garden.
Not today. I needed Lars’ phone to make a call. I was convinced Joyce was in trouble. Since the incident in he kept his cell phone in his pocket. Mine was at the apartment. This suit had no pockets and my purse was at home.
Following to snatch Lars from his kidnappers proved impossible. Every time someone stopped me to gush congratulations my stomach tightened. I thought about being rude but we were in  church and today was meant to be a joyous occasion.
I noticed Sarah’s foster son near the stage. He held a rectangular object in one hand. His fingers moved so fast they blurred. Texting, I hoped. I hurried toward him. He held a phone.
"Jamal, could I use your phone. There’s a call I must make.”
“Sure, Mrs. M.” His hand covered his mouth. “Forgot. You’re now Mrs. C. Do you know how to use one?”
I patted his crisp curls. “I may be old but I have some skills with modern technology. Mine’s at home.”
He scuffed the floor with the toe of his shoe. “Didn’t mean you were old.”
“It’s all right. I won’t be long.” I slipped from the noisy room and ducked into the small parlor. Drawing a deep breath, I dialed Herbal Haven’s number. After fifteen rings I hung up. How did I transpose the last four numbers last week? After two tries, I heard Joyce’s voice.
“Who is this?” she asked. “More harassment?”
“It’s Kate. What happened? What did she do?”
“Got herself murdered.”
“What?”


“No joke. Everything’s a mess. I couldn’t call you. They took me in for questioning yesterday morning and didn’t release me until an hour ago when it was too late to call.” Her voice trembled. “They told me not to leave town.”

Posted by Janet Lane Walters at 6:48 AM

Yikes! Looks like her intuition was correct. Who needs a honeymoon anyway? Loved the snippet, Janet.

Oh that's scary. Calling in for questioning and told not to leave town!!!

Your reference to Finlandia reminds of a time when I worked at a company with some Finnish customers. One of them was in town for training and came to my office for something, and I had the classical music station on. They were playing Finlandia. The woman simply could not understand why a US station would play the piece. For her, it was played for special occasions and only special occasions, NOT just for enjoyment.