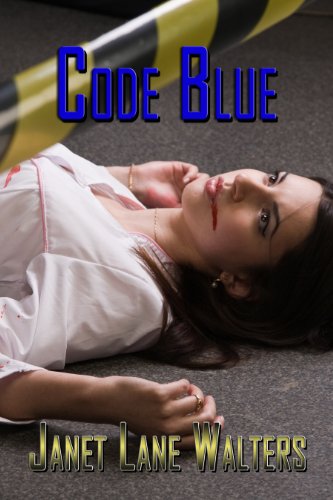 Join the authors at #MFRWHooks here    http://mfrwbookhooks.blogspot.com  for some great excerpts. Mine is from Code Blue and Features the villain.

In the medical suspense Code Blue by Janet Lane Walters, published by Books We Love and previously published as Obsessions, nurse Susan finds the body of the hospital’s “gossip queen” in the orthopedic storage room. She doesn’t realize this is the first of a series of murders involving her colleagues or that her life is in danger. She is a widow and is exploring a new romantic relationship that promises love but she fears the man she is falling for is as controlling as her dead husband. The arrival of courtship gifts, at first, seen as innocuous soon takes on a sinister note.ReviewsThis book kept me on edge from the first page to the last. Several times I just 'knew' I'd figured out who the killer was, but each time, there was a bit of doubt there until the very last paragraph! I highly recommend this book. 4 Stars (Excellent!)"--Tracie's Book Reviews by Kathy's Faves and Raves"A series of murders, suspense, action, a tad of love makes OBSESSIONS an intriguing tale designed to mystify your mind. If you love mysteries, you'll love Janet Lane Walters newest release. 4 Stars!"--Just Views"Fast-paced mainstream novel ... Walters plots carefully, each scene constructed to perfection. For readers who enjoy being terrified, this is an author to turn to for entertainment. She tells all, while managing to create paranoia among the characters."--Affaire de Coeur

Excerpts:
1.
He stood in the shadows just beyond the brightly-lit Emergency Room entrance. She was here. A series of quickly inhaled breaths brought a feeling of euphoria. He caught his lower lip between his teeth and savored visions of what was to come.
He felt the softness of her skin and of his fists pummeling her body. Susan would be with Mommy and he would be free. There would be no one to scold him for doing the things that made him feel so powerful and so strong.
He slapped his jacket pocket and growled. No hard piece of metal pressed against his hip. Susan was here. What had he done? He had planned this event so carefully but somehow, he had forgotten a vital piece of the plan. He pulled off his gloves and shoved his hands into his pockets.
What would he do now? He rocked from his heels to his toes. It had to be tonight. He couldn't wait.
The glow of anticipation faded. He struggled to renew the fire.
Susan was like Mommy. Until he closed her eyes, he couldn't act. Before he had a chance to make those people pay for what they had done to Mommy she had to die. He knew she would tell on him.
"I'll never leave you. They'll have to kill me first."


"Mommy, don't leave me."
2.
He checked his watch. Twenty minutes of his vigil remained. Since ten-thirty, he had waited in his car on the lower tier of the parking lot across from the hospital. Last night, he had realized he knew so little about Susan. He had to discover more. In less than an hour, he would know where she lived. The knowledge would help him make new plans so she would be like Mommy.
A smile formed. Had Susan liked the chocolates he had left at the desk for her? Had she put a piece in her mouth and rolled her tongue over the candy to savor the flavor? Mommy liked chocolates. Had Susan guessed he had left them to show her he had been bad.
Ten minutes and counting. Would Susan be on time? Her sporty white sedan waited on the second tier.
Time crept. Waiting made him restless. He turned the key in the ignition. The gentle rumbling of the engine soothed his ragged emotions. Hurry. Hurry. He chewed the inside of his lower lip and stared at the digital clock.
Rather than the numbers, he saw Susan. She opened the door of a house just like the one where he lived with Mommy. A white satin nightgown clung to her slender body. Her smile made him shiver with delight. Would she touch him and send heat to the private parts of his body? Her face became Mommy's. He smiled.
At eleven thirty, the sound of slamming car doors and the roar of engines woke him from his reverie. Lights from Susan's car cut through the darkness. Blood pulsed in his veins.
Her car passed his parking space. He switched on the lights and pulled into line behind her. Then keeping enough distance to prevent recognition, he followed her.
On the highway, her speed remained at a steady fifty-five. When she exited, his hand hovered over the horn. Someone should warn her about the danger of not using turn signals. He could have lost her and that would have made him angry. Mommy always tried to keep him happy. Why had Susan forgotten the rule?
Her car made a series of turns along streets where Victorian houses mingled with those of more recent vintage. He inched closer. Five turns later, the white sedan pulled into the driveway of a large gray house tucked behind a high yew hedge. After circling the block, he parked across the street, stared down the dark driveway and noted the pattern of lights on one side of the house. A second car was parked near Susan's.
Did Susan live alone? Who owned the car? Some widows took in boarders. Mommy had. She had believed the presence of a man provided safety. He was a man. Mommy didn't need any man but him, so one day, the boarder vanished.
The presence of the other car troubled him. Mommy, why? Don't you remember the last time?
He left the car and stood at the head of the driveway. A lawn stretched on either side of the asphalt. The yew hedge separated the house from the neighboring one. At the corner of the wide porch, a clump of rhododendrons grew.
Perfect. Anticipation stirred the embers of desire. Tomorrow Susan would be like Mommy.

Posted by Janet Lane Walters at 7:07 AM

You sure know how to get into the heads of your characters!

Thanks for stopping by. This villain is my favorite

Today's blogs have been shared on https://www.facebook.com/Excerpts.and.Promotions/

Dead bodies, a risky romance, and a killer who may be after her? Sounds like you have plenty of suspense!

Yikes! Creepy and just in time.

Sounds like a book not to read when I'm home alone! - Anne Kane