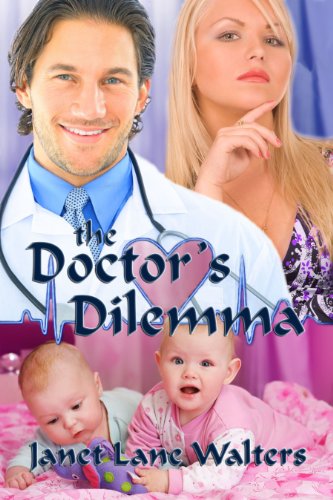 Join the writers at #MFRWHooks Here http://mfrwbookhooks.blogspot.com  to read some great excerpts. Mine is a medical romance. He's a rolling stone and she wants a settled life.

Blurb:
Take one doctor who’s made a career of temporary positions and avoiding commitment. Add a nurse who dreams of security and a settled life. Stir in infant twins bequeathed to him by his dead foster sister. Pour them into a small Texas town that wants the doctor to stay.
To Dr. Neal McKay, it’s a prescription for a dilemma.

EXCERPT:
She stooped and dried Molly’s tears. In coloring, the babies did resemble her. What if … An ache of longing filled her chest? She shook her head.
Not these babies.
Someday, she would find a man who wanted the same things she did -- a family, a home, roots. As yet, she hadn’t found the one who’d made her dream of forever.
She gave her name, driver’s license and credit card to the clerk. In return, she received the keys to a four door sedan and a detailed set of directions.
Prairie, here we come.
She prayed Dr. McKay would be waiting. The delay had added hours to her trip to her parents’ house. Her plans called for her to be in  by tomorrow evening.
The skycap pushed the baggage cart outside. Nora and the twins followed. A breath of hot air seared her lungs. In , the temperature had been in the seventies. Here, the mercury must be near ninety.
Once the baggage had been stowed in the trunk and the infant seats in place, Nora looked at her watch. Before starting the trip, the twins had to be changed and fed. She found the nearest rest room.
She picked up Molly, changed and cuddled the little girl for a few minutes. Then she did the same with Todd.
Adorable, sweet, lovable. She sighed. She couldn’t let these babies steal her heart. In two hours, she’d be in Prairie and on her way out of their lives. She fed them and pushed them to the car.
She studied the map. Seems like a straight shot west and a little south, she thought. Maybe this leg of the trip would work. She backed out of the parking space.
“Babies, we’re on our way.

Neal McKay put the last suture in the jagged cut on his patient’s calf. He stripped off his gloves and stepped back from the table. He glanced at the clock. Nearly three PM. He should have been home an hour ago, but the day hadn’t gone as planned. As the only doctor in town, this was the norm.
As usual, his day off had been filled with emergencies. A fractured tibia, a case of congestive heart failure, an acute allergy attack and now this.
They…his wards…should be at the house. He groaned and felt no more prepared for parenthood than he’d been the day he’d learned about his foster sister’s death…a week after her funeral. Even if he’d known, he wouldn’t have been able to leave his patients to attend the service.
He groaned. The thought of being responsible for the twins’ care brought waves of insecurity. None of his experiences in the past had prepared him for this day.
“Do you want to do the dressing?”
Neal looked at the red-haired nurse. “He’s all yours.”
“Thanks, buddy. I owe you one.” Jack Gardner glared.
“If you’re talking about the patch job, just doing my thing.” Jack’s reaction made Neal chuckle. In college, they’d spent hours one-upping each other. He missed the days when they’d been like brothers.
Jack raised an eyebrow. “Is there a problem you need solved?”
“You might say that.”

Posted by Janet Lane Walters at 6:43 AM