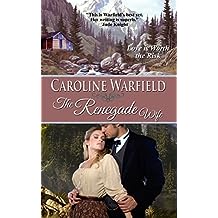 My current series is called Children of Empire.

Series Blurb
Children of Empire
Three cousins, driven apart by a deceitful woman rebuild their lives in the far corners of the Empire. Love will bring them home, if only they have the courage to embrace it.

The Renegade Wife, Book 1
Desperate and afraid, Meggy Blair will do whatever it takes to protect her children. She’d hoped to find sanctuary from her abusive husband with her Ojibwa grandmother, but can’t locate her. When her children fall ill, she seeks shelter in an isolated cabin in Upper Canada. But when the owner unexpectedly returns, he’s furious to find squatters disrupting his self-imposed solitude.
Reclusive businessman Rand Wheatly had good reason to put an ocean between himself and the family that deceived him. He just wants the intrusive woman gone, but it isn’t long before Meggy and the start breaking down the defensive walls he’s built. But their fragile interlude is shattered when Meggy’s husband appears to claim his children, threatening to have Rand jailed.

The only way for Meggy to protect Rand is to leave him. But when her husband takes her and the children to England, Meggy discovers he’s far more than an abuser; what he’s involved in endangers all their lives. To rescue the woman who has stolen his heart, Rand must follow her and do what he swore he’d never do: reconcile with his aristocratic family and finally uncover the truth behind all the lies. But time is running out for them all.

The Reluctant Wife, Book 2
When all else fails, love succeeds…
Captain Fred Wheatly’s comfortable life on the fringes of Bengal comes crashing down around him when his mistress dies, leaving him with two children he never expected to have to raise. When he chooses justice over army regulations, he’s forced to resign his position, leaving him with no way to support his unexpected family. He’s already had enough failures in his life. The last thing he needs is an attractive, interfering woman bedeviling his steps, reminding him of his duties.

All widowed Clare Armbruster needs is her brother’s signature on a legal document to be free of her past. After a failed marriage, and still mourning the loss of a child, she’s had it up to her ears with the assumptions she doesn't know how to take care of herself, that what she needs is a husband. She certainly doesn't need a great lout of a captain who can't figure out what to do with his daughters. If only the frightened little girls didn’t need her help so badly.

Clare has made mistakes in the past. Can she trust Fred now? Can she trust herself? Captain Wheatly isn’t ashamed of his aristocratic heritage, but he doesn’t need his family and they’ve certainly never needed him. But with no more military career and two half-caste daughters to support, Fred must turn once more—as a failure—to the family he let down so often in the past. Can two hearts rise above past failures to forge a future together?

The Unexpected Wife, Book 3
The Duke expects work to heal him. He doesn’t expect to face his past and find his future in China

Charles Wheatly, Duke of Murnane, accepts an unofficial fact finding mission to the East India Company’s enclave in Canton, China on behalf of the queen. He anticipates intrigue, international tensions, and an outlet for his grief over the death of his young son. He isn’t entirely surprised when he also encounters the troublesome offspring of his mentor, the Duke of Sudbury, but the profound love he discovers for the determined young woman is unforeseen and untimely. Charles certainly doesn’t expect to also face his troubled marriage in such an exotic locale. The appearance of his estranged wife in the company of their enemy throws the entire enterprise into conflict, and tensions boil over when the woman he loves is put at risk by his wife’s scheming—and the beginnings of the First Opium War.

Zambak Hayden seethes with frustration. A woman her age has occupied the throne for over a year, yet the Duke of Sudbury’s line of succession still passes over her—his eldest—to land on a son with neither spine nor character. She follows her brother, the East India Company’s newest and least competent clerk, to Macau to protect him and to safeguard the family honor—if she also escapes the gossip and intrigues of London and the marriage mart, so much the better. She has no intention of being forced into some sort of dynastic marriage, and she may just refuse to marry at all. The greed and corruption she finds horrifies her, especially when her brother succumbs to the lure of opium. She determines to document the truth. When an old family friend arrives she assumes her father sent him. She isn’t about to bend to his dictates nor give up her quest. Her traitorous heart, however, can’t stop yearning for a man she can’t have.

As an epic historical drama unfolds around them, both Charles and Zambak must come to terms with a love that neither expected.

Posted by Janet Lane Walters at 6:49 AM