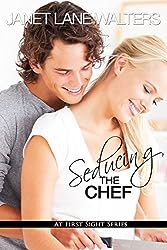 Seducing the Chef - Allie Blakefield, editor of Good Eatin' wants to do a feature on Five Cuisines a restaurant across the river from NY City. Her father forbids the feature and won't say why. She's not one to sit back and be ruled by someone. She borrows a friend's apartment.
While leaning over the balcony she sees a handsome dark haired man doing a Yoga routine. He looks up and she is struck by the Blakefield curse. Love at first sight.
The pair start a hot and heavy romantic interlude. She visits the restaurant and is recognized by Greg, the chef's mother. The woman goes ballistic and the affair is broken. Can Allie learn what's going on and rescue her love?


4.0 out of 5 starsThe chef and the reviewer deal with family drama
ByElf2060on July 25, 2016
Format: Kindle Edition
3.75“Seducing the Chef” by Janet Lane-Walter is part of the ‘At First Sight’ series. This contemporary romance centers around chef Greg Ramsey and review magazine editor Allie Blakefield whose searing attraction threatens to become disrupted by a tragic family feud between their respective parents. Navigating the tricky challenges to find a way to be together may require a very special dish…of crow.This relatively short story is a quick and breezy reworking of the traditional family feud theme a la Romeo and Juliet but given a wonderfully sensual twist. I had trouble believing that the offspring could be so ignorant of the feud and would have liked a bit more depth to the characters but I enjoyed the descriptions of the culinary journey (yum) and appreciated the setup for the next story in the series, in addition to the very long preview. The author has nice imagery and I think this was an enjoyable light story.A copy of this story was provided to me for review
3.0 out of 5 starsGood Reading
ByLAS Revieweron July 19, 2016
Format: Kindle Edition
Smoking hot!Wow … when the blurb says “love at first sight” it isn’t kidding. The relationship between our hero and heroine goes from zero to 60 in about two pages.I read this story knowing it was short, so I understand that it’s tough to fully develop a plot or characters in so few pages. I’ve tried to figure that into my feelings about the book, and into my rating. The author is definitely talented. Her skill is undeniable and her voice is fun and easy to read, and I have no issue with that at all. And, although there were a few editing errors and wrong word use, technically, it was a good story.My issue was the speed of the relationship development. “Love at first sight” doesn’t have to mean leaping into bed moments after meeting someone (and before knowing anything about them … integral to the story is the fact their families are enemies, but since they barely get each other’s first names before getting naked, they have no idea). They progress quickly to a little very light bondage, which felt out of place since that requires a bit of trust and how do you build real trust in a day? I’m not adverse to a story with plenty of sex (especially well-written sex, which this was, though a bit less descriptive than erotic romance), so it wasn’t that abundance that was frustrating, just that I felt as if the plot suffered because so much space was given to sex instead of story.Still, I really did appreciate the author’s voice and I would definitely pick up another one of her books to try. And if you prefer lots of heat in your stories, this may be a great choice for you to read.originally posted at long and short reviews
3.0 out of 5 starsRomeo and Juliet with less drama, more sex, and a happy ending, all with a tad of fairy tale magic thrown in
ByEmilyon July 19, 2016
Format: Kindle Edition
This was a fun, short, and sexy read. While there isn’t a whole lot of character development, the story moves quickly, pulling the reader along. There is a lot of sex in this, to the point where I would categorize this as an erotic romance novella, which I wasn’t expecting. There was a plot, but the romance and passion between the two characters were definitely the main focus. Plus, certain elements of the plot had me scratching my head in confusion or needing to suspend belief. In other words: Romeo and Juliet with less drama, more sex, and a happy ending, all with a tad of fairy tale magic thrown in. Oh, and some amazing and delicious sounding dishes.My only big complaint about the book is that it needs editing. There were quite a few comma mistakes, not to mention other grammatical errors, which kept pulling me out of the story. The grammar errors aside, this makes for a fun quick summer read, and I am interested in seeing what happens with Meg in book 2.*I received this book in exchange for an honest review.*

4.0 out of 5 starsQuick read loosely based on Romeo and Juliet
ByLiz Gavinon July 11, 2016
Format: Kindle Edition
***I received a copy of this ebook in exchange for an honest review***I’m not a grammar freak so the few typos I found didn’t make me shave off one star in my rating. However, some story line issues did. I don’t like spoilers so, as an example, I’ll just say that bondage requires intimacy and trust, which partners only achieve as a relationship progresses. Also, the blurb mentions a Blakefield curse: love at first sight. That wasn’t exactly how things happened so I was a bit disappointed.Because this is a short-story, I expected things to progress fast so the timeline of Greg and Allie’s affair didn’t bother me. After all, I could see many elements from Romeo and Juliet in Seducing the Chef. It’s almost like a modernized version where you’ll find the balcony, instant passion, an old feud, and misfortune fueled by misleading information. Although it isn’t a tragedy as the classic story of the star-crossed lovers, it’s also not a romantic comedy as its category describes it. But it’s a story that will make you feel good, hot, and bothered in the best way possible. The sex scenes are mouthwatering just as I like them. After all, being an erotica writer, sex scenes are my domain and I know how hard it is to write good ones. Janet Lan-Walters did a great job here. Kudos.I recommend Seducing the Chef if you’re looking for a quick, entertaining read to heat up your summer nights.


5.0 out of 5 starsA Great Romance!
ByCatherineon March 16, 2016
Format: Kindle Edition
I loved this book. It's one of the those books you can't put down and before you know it, you have the read the entire thing. It was a feel happy kind of book that leaves you feeling good. The characters are likeable and I would recommend this to all romance lovers.,
Posted by Janet Lane Walters at 6:38 AM