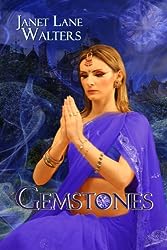 When Nicola Gordon and her younger sisters travel from India to England, she goes to a marriage she doesn’t want.
Drew Barlow has no desire for marriage, but his distant cousin and Nicola’s grandfather, ran the estates into debt. Drew agrees to the marriage for the money and to please the Dowager, Nicola’s grandmother, but he has no trust for women or for love.
When the two meet they clash and come together, igniting a blazing attraction they cannot resist.
Janet Lane Walter's latest book Gemstones is a stunning tale of the differences between two cultures, English and Indian, and what occurs when two different cultures clash. After the death of her father, eldest daughter Nicola Gordon must take charge of her family, fifteen-year-old Elizabeth, a budding flirt, and ten year old Margaret, a hoyden of the worst degree.

Gemstones
by Janet Lane Walters
Nicola has been raised in India but when her father passes, she must seek out marriage to protect her sisters and herself. Drew has his own demons. His childhood shaped the man he’s become. Forced to marry for money, he is pleased with a match with Nicola. Unfortunately, their pasts get in the way of their happiness and future.
The dramatic storytelling of British society against the backdrop of a young lady who is experiencing it new, draws the reader deeply into the tale. Nicola is intelligent, witty, and a take charge person. Yet, she’s insecure, unsure of her decisions and impulsive. All things that make her “real”. Readers will want to shake the characters at times for not finding time to talk or share their feelings but when they’ve had such upbringing, it’s understandable and lends more passion to the story.
Ms. Walters shows a deep knowledge for the culture of India and gemstones in this story as she weaves a masterful tale of two people who need to be loved. I wasn’t able to put the story down.

Gemstones by Janet Lane Water
In July 1810, Nicola Gordon’s father has been fatally wounded. Before he dies, he gives her a pouch of gemstones, one of which is the third eye of Siva (whose name is usually spelt Shiva) a sapphire. An expert on gemstones, Nicola is forced by circumstances beyond her control to flee to England with her sisters, where a warm welcome from their grandmother awaits them, and agree to a marriage of convenience to impoverished Drew Barlow, Earl of Denmere.
The earl, who has no reason to trust women – including his mother, an adulteress - marries Nicola for her fortune and to have an heir. Appointed her two sisters’ guardian in their father’s will, he is determined to be in complete control of his wife, his wards and his estates.
As time goes by Drew lusts over Nicola and she compares him to Siva.
Unfortunately, Nicola compares Drew to Siva when she sees Drew’s muscular body and brown skin.
Nicola grew up in India. She would have known that Siva’s skin tone is very pale blue. Apart from this moksha – liberation - is referred to as muksha. Also, I suspended belief when a reference is made to Nicola’s Indian teacher introducing her to a study of the kama sutra an ancient Sanskrit guide to sex. I could not imagine a young memsahib – no matter how indulgent her father was – being permitted to study it.
However, I think readers who enjoy unusual, sensual novels, with engaging characters will enjoy Gemstones, an amusing romp.
5.0 out of 5 starsWonderful!
By JKlopp on February 20, 2013
Format: Kindle Edition

Well written novel at an excellent price point. Not trashy and has an excellent storyline that keeps you interested until the last possible second.
4.0 out of 5 starsGood Book kept me interested
By LadySam78 on April 15, 2013
Format: Kindle Edition

This was a good read! It kept your attention. You loved the heroine and appreciated all she went through. I love the happy endings :)

Posted by Janet Lane Walters at 7:39 AM