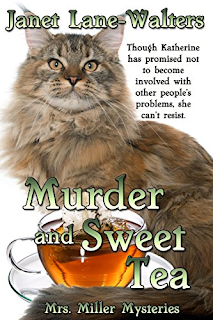 I waved to Maria and Sarah and started along the sidewalk. The July sun shone in a cloudless sky. For a moment, I halted and studied the “Painted Lady” across the street. Several vans filled the driveway and men carrying sheetrock and wood strode to the house.

The Victorian had been mine for many years and until I’d converted both floors to apartments, the house had been a single family residence. The new owners, Jenna and Richard, had begun a second conversion to return the house to its original purpose. A smile curved my lips. This pair had married in June and had begun making the house into a home.

I turned the corner onto my street. Sun glinted on the dark waters of the Hudson River and revealed the construction of the new .

My thoughts drifted to my husband. Our first anniversary would occur next month and I had visited with two of my friends to plan a barbeque. My kind of party. Lars would have made reservations at the Cedar Inn where our second reception had been held. I had missed the affair and so had Lars. An out of state friend had needed my help and I speeded to her side. Lars and I had our differences but love and friendship allowed us to compromise. Our marriage is based on a long friendship, first as two couples and then as two who had lost their mates.

Robespierre ambled up the street toward me. When he reached my side, the Maine Coon cat butted my leg with his head. Was this a welcome home or a bid for more food? At twenty pounds, he was large. His black, brown and white long hair made him seem larger.

As we passed the vacant “Dutch Colonial” next door to my new abode, I noticed a For Sale sign on the front lawn. The news brought curiosity. Who would buy? The elderly couple who owned the house had moved to a senior complex last year.

Moments later I reached home, a sprawling ranch house situated at the river’s edge well above the shore. The cat dashed to the kitchen. Lars sat at the table cradling a steaming mug of coffee. I sprinkled a few bits of dry food into Robespierre’s dish and filled a glass with spearmint iced tea. I joined my husband.

Lars glanced away from the newspaper. “Don’t leaving Megan with us for the day. He’s heading to the city.”

“Possibly but he has an appointment with some publisher for a freelance bit designing book covers.”

He groaned. “You only have one. Megan is your step-grandchild the same as ----- is mine.”

“By blood, you’re right. Robby adopted me and so did Jenna after her grandmother was murdered.” I met his gaze. “The house next door is for sale. The sign went up this morning.”

Lars shook his head. “Are you worried about the Dunns?”

I glared. “Why would I worry? I know where they are. I’m hoping we acquire good neighbors.”

“And no bodies for you to find.”

I tapped his hand. “Bodies find me. I don’t seek them.”

“Is that a promise?”

The twinkle in his blue eyes dissolved my anger. “I’ll leave the next one for you.”

“Thanks a lot. You’re the one who collects corpses like a berry picker fills their basket.”