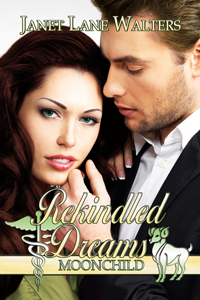 Returning to Fern Lake after ten years for the funeral of his cousin and teenage enemy, Simon Parker learns his high school sweetheart is nine months pregnant and seven months divorced from his cousin. Their meeting is complicated by her labor and driving her to the hospital. An attempted cheek kiss lands on her mouth and those old feelings resurface. Dana Collins responds to the kiss but Simon walked away ten years before when she refused to go all the way. In those ten years he has never tried to reach her. Her marriage to his cousin lasted less than two years and she knew she’d made a mistake. Can this pair put the past aside and let the embers of an old love be rekindled?
Rosemary Morris
4.0 out of 5 stars Young Lovers Reunited

Reviewed in the United States on October 8, 2016

Orphan, Simon Parker, walked away from his dysfunctional uncle, aunt and cousins, as well as Dana his childhood sweetheart. He joined the marines, and the police force. After an incompetent superior officer made a mistake that resulted in Simon’s partner being killed and Simon being shot in the leg, Simon resigned.Simon’s aunt asks him to return to the town where he grew up for his cousin Randy’s funeral. When he does, he meets Dana whom he has never stopped thinking about.Dana and Randy have divorced but, when Simon meets her, she is pregnant. Randy, the father, wanted nothing to do with her or the child. He claimed he was not the father.When his cousin Randy’s daughter is born Simon falls in love with her, and wants nothing more than to marry her mother and become the baby’s stepfather. But Dana doesn’t know if she can trust him.
Laurel Freemont
4.0 out of 5 stars Old loves and new dreams
Reviewed in the United States on October 9, 2016
Simon Parker walked away from Dana Collins, the love of his life but he never forgot her. Now he has come home to Fern Lake for his cousin's funeral, the cousin who married Dana and had a child with her. Family dynamics, old and new, drive this story with some surprises along the way. A good fireside read.
Roseanne Dowell
4.0 out of 5 stars A story of immature love, heartache, and heartbreak.
Reviewed in the United States on January 4, 2014
Can Simon Parker right the wrong and pain he caused Dana Collins? When he drives her to the hospital to deliver her baby, the attraction is still there between them. Can Dana learn to trust Simon again? Will her ex husband’s twin sister complicate their lives? If I say more I’ll give away the entire book. Ms. Walters weaves a tale of a dysfunctional wealthy family, compassion, and love.
Kat Taylor
4.0 out of 5 stars Reunion romances are my favorite kind of stories
Reviewed in the United States on July 23, 2014
Reunion romances are my favorite kind of stories. The chemistry sizzled from the beginning and never lets up. Nice escape for a summer night.