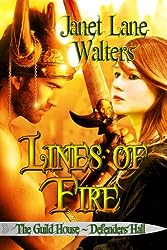 I'm joining iwth other authors in a blog hop to give you a bit about some really great books. We are here   http://mfrwbookhooks.blogspot.com  My offeringis a fantasy romance with some sword fighting

Blurb:
To honor a promise made to his dying father, Alric trains as a Defender. For some reason the Swordmaster wishes him gone and his first two bondings end in failure. A failed third one will see Alric banished. His meeting with the older daughter of the Swordmaster reveals a double heart bond, but she has been promised to Petan, the Swordmaster’s favorite. A duel is fought and though Alric can read Petan’s lines of fire, the other dueler cheats and nearly kills Alric. Petan is banished but he knows secret ways into Defenders Hall. Kalia, his now bondmate’s lines are tarnished. Not only do Alric and Kalia need to find Petan, they must learn how to cleanse her lines. Buy Mark:

Whispers of the grief to come slithered through Alric’s thoughts. He knelt beside his father’s bed and brushed the older man’s hand. The lines of fire on his father’s skin, once bright scarlet, had faded to pale pink. Thought the end approached, Alric wasn’t ready to see his father pass from life into the abyss of death.
“Papa,” he whispered. "The men of the Guild Houses and their bondmates arrive in just five days to test me for admission into the Defenders Hall.” His words were a plea for his father to remain with him for that time.
The older man’s eyes opened. The pain Alric saw brought wetness to his eyes. When his father died, there would be no relative to witness the acceptance as a Defender trainee. From the moment his father had given Alric a wooden sword and shown him the ways one could be used, he had desired to leave the village and pursue more training.
With fierce determination, Alric sought to infuse some of his vitality into his father. As always, the attempt failed. Why could the lines of fire be used to halt the flow of blood and to not achieve a return to vitality? Alric groaned. If he had been on the wood-cutting trip into the forest, he could have helped his father and the other man. A boar had gored and broken their bodies. The other lumberman had died. Alric’s father had lingered and suffered.
“Son.”
The harsh whisper startled Alric. His father hadn’t spoken once in the ten days since his shattered body had been carried to the village.
“Papa.”
“Listen. Be Defender.”
“I promise.”
“Swordmaster. Enemy. Lines of fire. Not all can see,”
Alric frowned. What die his father mean? Was the Swordmaster the reason his father’s bond had been broken and he had been banished to this distant village? Why should the lines remain a secret? Before he had a chance to ask his father spoke again.
“Find sibs.”
Alric’s head jerked up. “Sibs. I have none.”
“One boy. One girl. Too young to steal away. Just you.”
This new information rocked Alric’s thoughts. “I will find them.”
“Bracelet. Take. Use. True mate.”
New ideas and new demands swamped Alric. Questions rattled like nuts falling from the trees in autumn.
“Save. Defenders. Restore old ways. Promise.”
“I will.” Alric wasn’t sure what he had promised but his father’s words flowed through his thoughts the way the lines of fire flowed over his skin. He pressed his forehead against his father’s hand and slammed shut the gates of grief.
The rattled breathing slowed and began again. Each stop and start brought a welling of tears closer to the surface. The sound stopped. Alric waited. He raised his head. The lines of fire on his father’s skin vanished.
Gut churning sobs began and wracked Alric’s body. When the storm of tears stopped Alric rose. With leaden steps he walked to the cabin door to summon the village women to care for his father’s corpse.

http://bookswelove.net/authors/walters-janet-lane-romance-fantasy-suspense-medical/
Posted by Janet Lane Walters at 6:45 AM

A very clear call to duty. And a sad one!

Emotive! And so many secrets...intriging!

The excerpt is extremely well-written - full of emotion which draws the reader into the story.

Excerpt pulled me in. Now I want to see how Alric handles all the tasks given him.