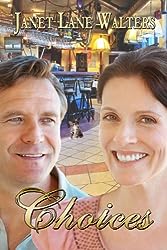 Johanna Gordon devotes her time and energy to her job as Director of Nursing at Hudson Community Hospital. With budget cuts hanging over her head, Johanna suspects the CEO of scheming a plan that threatens her job as well as the hospital, and she’s determined to find out why.
The choices she’s made for herself and her career leave her with no social life until she meets Dylan Connelly. He’s everything she’s always wanted, loving, devoted to his kids and everything she’s never had. Just when she finds love with the new man, an old flame returns with promises of a life together. Johanna has to decide between security and companionship, while trying to recapture the past, or moving forward with her new life.


Janet Lee Walters has provided her many fans with still another conflict-driven story that's filled with a realistic, edgy medical setting, a plucky proactive heroine, and a cast of secondary characters that portray all the foibles of the human condition. Joanna Gordon, Director of Nurses at a community hospital is faced with tough choices. She must stand up to the unscrupulous CEO, doing what she knows in her
heart is right, even if it costs her her job. Joanna grapples with choices in the romance department as well. While she is the epitomy of a driven career woman at the hospital, when it comes to matters of the heart, she's much more the soft kitten, just like her pet kitty at home. The book held my interest right until the end as I kept reading to know which man would win out. I wasn't disappointed!
All-in-all, this an enjoyable read that deserves a 5 star rating.

Posted by Janet Lane Walters at 7:40 AM