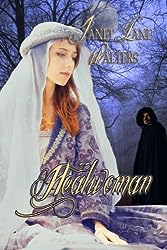 Today I'm joining other authors in a blog hop. My book is a fantasy romance Healwoman. You can find the other authors here   http://mfrwbookhooks.blogspot.com

Blurb:
Born under a dark moon, Norna has to battle rumors that she is tainted by evil and unworthy of being anything more than a servant. Discarded by her mother, she runs away from her aunt, a priestess who wants her to enter the temple.Instead, Norna chooses to be a Healwoman, and a chance encounter with a novice hoping to be a priest helps her discover she has talents of water, air and fire at her disposal. With these gifts she is called on to battle treachery and attempts to prevent the promised prophecy of the god and goddess. As she battles evil powers, she loses her heart to Shandor, the man she met when her journey first began. She must come to grips with Britha who plots against her. Shandor has his own enemy Vorgan. When the pair of foes unite, the battles begin.

The Hodara of Healing in Bethsada

Mabe sat on one of the stone benches in the Grotto.  The Eldest had called her here and she didn’t know why.  She didn’t think she had done anything to deserve a judging, but why else would the god and goddess want her presence?  Soon, the moon would rise and she would dip her hands in the chill waters of the crater lake.  Midra and Midran would speak.  The only time she had heard their voices had been the night she’d finished her training and had been accepted as a Healwoman.  She rubbed her hands along her arms.
The Eldest touched her shoulder.  “The time is near.  There are things I must tell you.”
“Are you sure ’tis me they want?”
“You are part of their plans for the future.”  The old woman smiled.  “In the days of yore, the Three of Midra--Seer, Warrior, Healer--united with their mates.  Together they defeated those who embraced the dark faces of Midra and Midran.  For a time, the priestesses and priests who served the god and goddess walked in the light and brought miracles to the land.  But as time rolled on its circular path, what was once came again.  The dark face of Midra enthralled the priestesses.  They turned from the light.  Then the power of the goddess faltered.  Midran drew his priests into the shadows.  Still, what was will come again.”
Mabe nodded.  She’d read the old tales kept in the archives.  She had found them fascinating, but were they true?  They told of the days when the face of the goddess had darkened.  ’Twas then the Healwomen had walked away from the temples to found their own place.  In the years that followed, the temples had ruled and men had little power in ruling any of the four divisions of the land now known as nomes.  Gradually, the priests of Midran had gained strength, first in the light.  Then they had embraced the dark face of the god.
She glanced at the dome over the cavern.  Rays of moonlight shone through the four crescent shaped holes, one for each nome.  Keltoi, Sippal, Nilos and Incal.  Bands of color--red, yellow, blue and white--spread across the water.  The arrival of the colors never failed to startle and amaze Mabe.  What caused them to appear?  She turned to the Eldest.  “What do the legends have to do with me?”
“One will come from Keltoi.  She is a daughter of this nome.  Her lineage rises from the Seer, the Warrior, the Healer and their spouses.  She will have four talents and will be the gleaner who finds the Four and Four.  One pair for each nome.  They will bring light from darkness.  You will seek and find her.  Bring her to Bethsada so she can enter the hodara and learn.”
Mabe nodded and accepted the task.  She felt both humbled and excited to be chosen.  “When do I leave?”
The Eldest rose.  “The god and goddess will tell you when.”  She placed her hands on Mabe’s head.  “Seek their blessing.  Their commands are for you alone.”
Once the shuffling footsteps of the old woman no longer echoed, Mabe closed her eyes.  Her thoughts turned inward.  She had hoped to remain in Bethsada and join the other women who taught in the hodara.  Though her talents in Earth and Fire were moderate, her years of travel had brought her knowledge of the customs and ways of the people in each nome.  This knowledge was valuable to the Healwomen who staffed the many hodaras.
She rose and walked to the rock shelf surrounding the crater lake.  She knelt and dipped her hands in the icy water.  “Midra, Midran, I have come.  What would you have me do?”
As the voices of the god and goddess sounded in her head, awe filled her being.  The desires to laugh and cry co-mingled.  She remained silent and listened.
*Go.  Seek the one who will find the Four and Four.  Beware all who serve the dark faces.  They will try to keep you from completing your task.*
“How will I know the one I seek?”
*She will find you, for she prays for refuge from the ones who slink in the shadows.*
“And the enemies?”
*One you know, for you have faced and defeated her in the past.  Of the other, if he knew the girl was his daughter, he would be filled with joy.  While he is not of the dark, he might seek to sequester her so her growth would be stunted.*
*Of her enemies, there are two she must face.  One would see her dead.  The other will crave her as a possession.  Rise.  Gather your supplies.  Choose a companion for your journey.  On the morrow, leave for Keltoi.*
Mabe sank back on her heels.  She dried her hands on her skirt.  She rose and left the Grotto.  There was much to do before morning.  As she strode through the tunnel, she considered who to ask to accompany her.  Glena was her choice.

Nice look into her world.

I am amazed at how many books you've written. You are one prolific writer!

Kayelle, I've been doing this for 50 years. Gives one time for a lot of books.

Nothing is ever as simple as it seems!

I'm a day behind. Been behind all week.
Great snippet. Seems like an easy task - lol- but then we writers rarely let that happen.