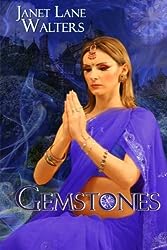 Today I'm joining other authors in a blog hop to allow you to read samples of our books. Here   http://mfrwbookhooks.blogspot.com  My book is a sensual historical romance set in the Regency era

Blurb:
When Nicola Gordon and her younger sisters travel from India to England, she goes to a marriage she doesn’t want.
Drew Barlow has no desire for marriage, but his distant cousin and Nicola’s grandfather, ran the estates into debt. Drew agrees to the marriage for the money and to please the Dowager, Nicola’s grandmother, but he has no trust for women or for love.
When the two meet they clash and come together, igniting a blazing attraction they cannot resist.
Janet Lane Walter's latest book Gemstones is a stunning tale of the differences between two cultures, English and Indian, and what occurs when two different cultures clash. After the death of her father, eldest daughter Nicola Gordon must take charge of her family, fifteen-year-old Elizabeth, a budding flirt, and ten year old Margaret, a hoyden of the worst degree.

Nicola sat on the edge of the bed and once again counted the money she and Sarad had received for the two rubies sold to a jeweler Mr. Grey had recommended. She had asked him for the name of someone who could repair her mother’s pin as a present for her newly found grandmother. Though Mr. Grey had been generous about providing them with clothes and books during the fortnight they’d been at his house, she wanted money to tuck away for an emergency. The rubies had brought more money than she’d expected. With a smile, she put the money in the sandalwood box her father had given her.
She stroked the smooth, scented wood. The box had a secret compartment. Her father had shown her how to open it but she’d forgotten the trick. One day, she would remember.
With a sigh, she set the box on the dresser and went to find Elizabeth and Margaret. Seeing they were occupied with their lessons, she went to the morning room.
She stood at the window that looked into the square. A fortnight and the Earl hadn’t come. What would she do if he never arrived? Her sisters’ safety depended on her marriage to him. She didn’t believe Cousin Fergus would forget his plans.
At breakfast, M. Grey had mentioned that two of the ships in which her father and his partner had shares were due from . Her heart thudded. Would her father’s cousin be on one of them?
She sank on the carpet and twisted into a semi-lotus position. She wished for the shirt and dhoti she wore at home, but they were packed in one of the trunks sent to Denmere. After a series of calming breaths, she felt less on edge. She returned to the window.
I’m sick of the idles, she thought. She craved stimulating activity and new responsibilities. She would never be an English lady and sit with idle hands. But here, there was nothing. Mr. Grey’s housekeeper needed no instructions. The small garden behind the house waited for spring. A dressmaker had completed the wardrobe Mr. Grey had ordered.
A carriage halted across the street. A man climbed from the perch. Nicola’s breath caught in her throat. His greatcoat swirled as he turned and stared at the house. He reached the sidewalk. She caught a glimpse of sun-tanned skin. His hair gleamed like polished jet.
Siva! Dare she hope? She felt like Parvati must have the first time she had seen her consort. Nicola turned from the window. ’s remark about her dreams arose. Just for a moment, she would allow herself a fantasy and the hope she would find the kind of love her parents had had for each other.
"Nica, Nica, I saw him. The Earl is here." Margaret dashed into the room.
"I thought you were at your lessons. What will the Earl think when he sees you acting like a romp?"
The child grinned. "I doubt he’ll be troubled. I’m not to be his bride."
Nicola swallowed a laugh. Trust Margaret to make her forget for a second what she faced. Nicola crossed to the sofa and sat with her hands in her lap. Her thoughts rattled like gemstones in a pouch. Should she stay or hurry to her room and wait to be summoned? Was her morning dress of pale yellow calico with a deep green embroidered band at the hem suitable for meeting an earl? She thought of the dozen day dresses in the wardrobe. Would one of them be better? She looked at the watch hanging at her waist and wished the meeting were over.
Margaret bounced on the sofa. "When will we meet him? He’s tall and not at all like I thought he would be."
"Sit still or I’ll send you upstairs."
"Aren’t you excited? Don’t you wonder what he’ll be like? We’ll see our grandmother soon. Do you think she came with him? Do you --"
Margaret’s chatter drove Nicola from the sofa. She had to distract her sister before the chatter produced a scream. Nicola attempted to calm her racing thoughts but this time the calming breaths had no results.
"He went into Mr. Grey’s study. You know the place with all the books and where I spilled the ink. He looked most serious."
Nicola clasped her hands. What did it mean? She walked toward the door and then turned and walked back to the sofa. She sat beside Margaret and chewed on her lower lip.
Finally, the door opened. Mr. Grey entered. The man Nicola had seen outside the house followed him. She grabbed Margaret’s hand and pulled her to her feet.
"My lord," Mr. Grey said. "May I present Miss Gordon and her sister, Margaret?"
Nicola curtsied. "I am pleased to meet you, my lord."
"Miss Gordon, Drew Barlow, Earl of Denmere." Mr. Grey completed the introduction.
The Earl bowed over her hand. "Welcome to ."


Nicola looked into eyes the same shade of blue green as her own, though his seemed hard as glass. Not knowing what to do or say, she stared. Her heart fluttered. Her thoughts churned. Seen at a distance, he had been an answer to her dreams, but up close, he made her feel giddy and light-headed.

Posted by Janet Lane Walters at 6:42 AM

Giddy and light headed is a good way to feel - hoping the feeling is mutual with the man of her dreams.

Wonderful excerpt! And I too hope her hero returns the feeling.

I am intrigued and plan to read and review Gemstones.

This is classically romantic, Janet. I love it!

Love the excerpt and the title!