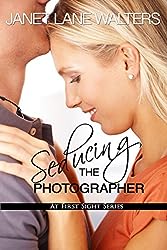 Blurb:
Meg is sure she’s made a mistake when she agrees to pick up and Injured Steve, the magazine group’s photographer from the airport. The first moment she saw him, the Blakefield Curse took effect. She fell in love and she was a forever woman. He wasn’t. Spending time with him over the weekend only cements her feelings. She has rules of life and she breaks everyone of them even the new ones she added that weekend.
Steve has been intrigued by Meg and he enjoys her blushes. He’s found ways to raise them but something more is happening here. When she leaves abruptly, he wants to track her down but his broken leg makes pursuit difficult. Now he must find a way to win her over and that takes some time and clever moves.

“Wait a minute.” Meg’s shoulder muscles tensed. Once more she had leaped into a steaming cauldron. She stared at her brother. What did his cat in the cream smile mean? Was this some kind of sick joke? “You want me to do what?”
“Go to the airport. Meet Steve’s plane. Drive him home. He spoke each word as though he spoke to a child.
Meg’s emotions tumbled over each other like stones in a polishing tumbler. “I’m the last person he would want to see. Remember the scene I created three weeks ago.” Though she hadn’t shouted her accusations the words had flowed through the open office door. She would never forget Steve’s reaction. First an angry denial. Then he’d laughed and declared he would do no more photo shoots for Good Lookin’. His voice had boomed.
“Come on. Steve doesn’t hold grudges. Kiss and make up. He would enjoy that.”
“Right.” Meg glared at her brother. She couldn’t tell him or anyone about her first meeting with the photographer.
He’s the one. Her body had taken fire the moment their hands had touched. She knew she’d been taken by the Blakefield curse.
Every time he came near or when there was a casual touch her body reacted and the voice in her head repeated those fatal words. She blushed. His knowing green eyes showed he knew about the strong attraction. He always smiled and made a teasing remark. Though she’d become adept at avoiding him her feelings hadn’t changed.

Nice, sharp hook. I especially loved this line: "emotions tumbled over each other like stones in a polishing tumbler."

As I am recovering from a broken leg myself, I do feel some empathy for your "not the forever type" hero!

I like that you've gone against the trope of overprotective brother. It sounds like they have a fun sibling relationship.