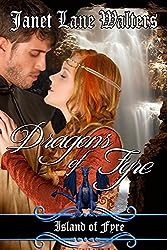 After escaping from the temple of Fyre, Drakon returns to his home to find only two people and a yellow dragon. He and the Old One learn as much as they can about the land at present. The lord of Sea Cliff Tower has gathered the remaining dragons at his keep. On learning the High Peaks Tower’s red dragon is with egg they arrange her escape and rescue her eggs. Now they must find a way to defeat their enemy and return the dragons to the other towers.
Arana, sold by the temple priestesses to the slavers is bought by the lord of High Tower and made a part of the family. Before they are able to adopt her the lord of Sea Cliff Tower invades and destroys the family, taking her and her friend prisoner. Drakon is sold. Arana because she can speak to the dragons is made a slave care-giver. She saves a green egg and raises the green dragon. After helping the High Peaks Tower’s red dragon escape she is in danger and must find a way to escape. Her attempt to ride the green dragon succeeds and she arrives injured and ill. Once she recovers she and Drakon attempt to find a way to rescue the other dragons of Fyre.


Another from the prolific and multi-talented Janet Lane Walters. This tale is the next part of an on-going series set in a colorful, sexy, dangerous fantasy world which put me in mind of fantasy in the tradition of Conan the Barbarian. Here we have telepathic dragons, who have many magical properties in their enchanted hides and who were my favorite characters. There are also high priestesses, wizards, and warlords all warring with one another, seeking control over the world and seeking to turn the sentient beautiful dragons into mere commodities--their hides have proved to be magically valuable. The heroine is strong, inventive and brave. The hero is a wounded warrior, recovering all his faculties after enslavement as a teen-ager. The villain--well, I'm waiting for him to get his in the next installment. This is very readable and would make a great graphic novel
Posted by Janet Lane Walters at 5:53 AM