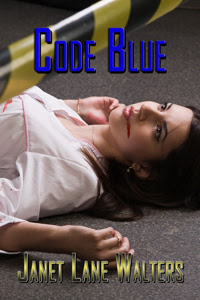 Available from all venues. There will soon be a Canadian version.

In the medical suspense Code Blue by Janet Lane Walters, published by Books We Love and previously published as Obsessions, nurse Susan finds the body of the hospital’s “gossip queen” in the orthopedic storage room. She doesn’t realize this is the first of a series of murders involving her colleagues or that her life is in danger. She is a widow and is exploring a new romantic relationship that promises love but she fears the man she is falling for is as controlling as her dead husband. The arrival of courtship gifts, at first, seen as innocuous soon takes on a sinister note.

This book kept me on edge from the first page to the last. Several times I just 'knew' I'd figured out who the killer was, but each time, there was a bit of doubt there until the very last paragraph! I highly recommend this book. 4 Stars (Excellent!)"--Tracie's Book Reviews by Kathy's Faves and Raves

"Fast-paced mainstream novel ... Walters plots carefully, each scene constructed to perfection. For readers who enjoy being terrified, this is an author to turn to for entertainment. She tells all, while managing to create paranoia among the characters."--Affaire de Coeur

Enjoyable Book!
ByShuggy Pieon January 16, 2013
Good book for anyone to read. Very little medical term if any. Liked that it didn't contain Harlequin-type romance, but real people with real lives, along with murder and mystery, it was great, quick read.

ByShirleyon April 25, 2013
Format: Kindle EditionVerified Purchase
I work in the medical field and love a good medical thriller. I liked the twists and turns. Kept me guessing.

5.0 out of 5 starsCode Blue
BySonia Enriquezon December 26, 2012
Format: Kindle EditionVerified Purchase
Code Blue is an interesting book that keeps you trying to out what the identity of the killer was. It's an amazing book.

Please write at least one word

Showing 0 of 0 comments
Sort by:

4.0 out of 5 starsCode Blue
ByChookie9195on September 24, 2012
Format: Kindle EditionVerified Purchase
I enjoyed this book - The characters had you guessing who it was in the end - Would happily recommend it to others