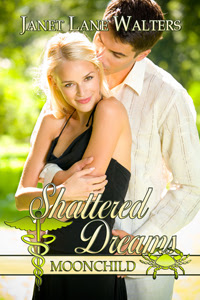 Shattered Dreams - Available at most venues

Torn apart years ago by lies and threats, Rafe Marshall returns to town and confronts Manon Lockley. She has been told he died on the night he stood her up for their senior prom.

When she faints, Rafe catches her and realizes he hasn’t stopped loving her. Manon carries anger and now grief that wasn’t real. Rafe wants her in his life, but she doesn’t want to talk about what happened in the past. She can’t be sure if her father or someone else told lies about Rafe and she doesn’t want to know. Can Rafe persuade her to listen? Not without a battle.

3.0 out of 5 starsInteresting romance mystery
ByDeborahTOP 1000 REVIEWERon June 15, 2014
Format: Kindle Edition
Manon gets stood up on prom night by her boyfriend Rafe to then be told he's dead, twelve years later he walks back into her life and she doesn't know what to do or think, has everything for the last twelve years been lies, why did he leave and who told her he was dead. Rafe has always loved Manon, the accident left him with scars and gaps in his memory to finally fully get his life back he needs to talk to Manon and by sorting out the past he can then move on with his future hopefully with her.
This was an interesting book which starts with the twelve year anniversary of Rafe's death and together we discover what actually happened all those years ago.

The story of the death of young love and the birth of adult love. It is the in between that gets you. Also the knowledge that you can't stop real love.

ByReaderon October 15, 2013
Format: Kindle EditionVerified Purchase
i liked this story, it was okay and had potential to be better if the characters were more developed and the conflict less forced. A man she thought dead walks into her office and she doesn't want to find out how that was possible, really? She is willing to accept she is still attracted to him but she doesn't want to find out how he could still be alive? She was a little juvenile, holding a grudge from when she was seventeen and the guy stood her up because he was ran off the road but only accepts it when it's convenient for
Posted by Janet Lane Walters at 4:37 AM