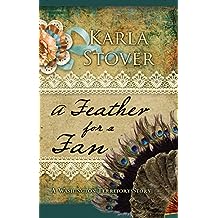 New Tacoma, Washington Territory was a rough, frontier town in the 1870s, a community of barely 300 people, where life was centered on the waterfront, and revolved around the Northern Pacific Railroad.  It was a place magazine articles described as having a climate just like that of the Mediterranean. This is the town to which the Bacom family, Ira, Verdita  and their three children, Hildy, age 12, Reuben, 8 and Dovie 1 1/2 have come, leaving behind friends, family and the coal-dust air of Johnstown, Pennsylvania in hopes that Ira will regain his health.
A Feather for a Fan is Hildy’s story of her first year living on Puget Sound. The family has to find a place to live; Hildy and Reuben start school where Hildy meets, among others, Nell,ildHi
an outspoken girl of overwhelming poverty who wants Hildy’s mother to teach her how to be a lady.  While Nell becomes Hildy’s closest friend, she gradually builds a community of eclectic friendships:  Mrs. Money, who runs a stationary shop where she also raises birds, Mr. Peak, a laborer who gives her a chicken and buys bread she makes, and the Misses Violet, Lily and Rose, ladies of the night who save Hildy’s life during a violent storm.
Living in New Tacoma means learning to walk on streets where the mud is more than a foot deep, or on wooden sidewalks under which pigs wallow and vermin thrives, a town of massive mudslides that close the school, not to mention trigger happy gamblers. But it’s also a place of great, unspoiled beauty—a bay full of steam ships, bateaus, two and three-masted schooners and the occasional Chinese junque, of so much seafood no one need ever go hungry, and Mrs. Wilkeson’s amazing hat, the talk of the town. And even twelve-year-old girls have romances.  Samuel is an enigmatic boy, part French Canadian and part Indian who is in and out of Hildy’s life everytime something important happens.
The book ends with a fire that burns a good portion of one whole street, after which some of her friends move away, and which finally reveals the secrets Samuel has been keeping.
Wynters Way

In the 19th century, a twenty-two year old, unmarried woman was on the shelf—already an old maid, destined to live on the charity of a family member. For Jane Heath, this is not an option. Disappointed in love and determined to make a life for herself, she takes a job at Wynters Way, the remains of a burned manor house deep in the country near the little town of Yearsley. The Wynters family is returning from India and Jane is hired to make their home habitable.
From the day she leaves home, Jane begins encountering the locals: a mute named Billy, a little person named Bright who is destined to become her closest friend, and the aggravating local doctor. And as if her job isn’t difficult enough, Wynters Way feels inhabited by the presence of a mysterious family member, one the Wynters won’t talk about. What are the strange sounds Jane hears? Bright says they’re just birds on the roof and mice in the wainscoting. But that doesn’t explain pockets of frigid air that suddenly appear, or the scent of apple blossoms only Jane encounters.
Wynters Way combines life in a brooding country house from the housekeeper’s perspective with a love story, and a family mystery with a solution destined to change lives.

Mercedes Mackaill is on a month’s leave of absence from work, and has arranged to dog sit for her parents at their Hood Canal home near the little town of Tahuya, Washington while they are away. It will be the perfect time, she thinks, to write the “Great American Novel.” Surely someone who reads as much as she does can write a book. The day she arrives, Mercedes meets retired school teacher Alice Thorndyke over a table of used books and, a few days later, watches as Miss Thorndyke’s body is pulled out of the canal. From then on, nothing goes as planned. Something, or is it someone, sneaks around the house at night, trying to get in. During a quick visit to her apartment in Tacoma she learns that a man was seen picking the locks on her door. Her car is broken into, she can’t figure out why. It contained nothing of value. However, when someone loosens the plug in her boat and she nearly drowns, things start to get serious. Mercedes’ life is further complicated by Dorsey Finch, the man she saw with Miss Thorndyke a few days before the elderly lady drown. Finch had been working as the retired teacher’s handyman, and asking the old timers a lot of questions about the area. Mercedes and Finch’s love/hate relationship leads them to The Lady of the House, a used book Mercedes bought at the Tahuya Days festival, and a whole lot of questions about who Alice Thorndyke really was and, more importantly, who wanted her dead and why..

Karla's Books can be found here http://bookswelove.net/authors/stover-karla-mystery-romance/
Posted by Janet Lane Walters at 6:33 AM