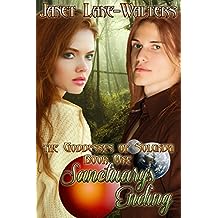 Join me with other authors at #MFRWHooks to find some really interesting books here  http://mfrwbookhooks.blogspot.com  Sanctuary's ending is a fantasy story of a brother and sister separated by their talents. They leave their mountain sanctuary with several friends to discover if he world has survived ancient troubles.

BLURB:
In the beginning the goddesses Sola and Luna shone on their sister bringing forth all life. Erda grew rich and fat and the people loved the Three. Some began to lust for the treasures buried beneath Erda’s skin. She offered them freely but men began to dig and plunder her riches. Sola and Luna hated what they saw. With floods, winds, fires and earthquakes they punished the children Erda had raised.
For five hundred years has passed since a group of the goddesses followers retreated behind the Gap. Almost twenty years ago, five children were born. They were tested for gifts of the goddess and to enter training. One became a Healer, one a Singer, one a Sensitive and one an Elder. David’s test was conducted by a Teacher who hated him and he was assigned to the lowest class and became a shepherd. Though he accepts this, he is angry especially when some of the talents begin to emerge. He has healed animals and can sense the emotions of others. The five had always talked about leaving the sanctuary.
On the evening of the spring equinox, the four are to be inducted into their specialties. The Elder trainee among them has plans to leave. He invites David to join them. David’s enemy offers to accompany them and is given permission. What will they find when they enter the world? A Seer gives a forewarning. Of the six only four will return. Who will be left behind and why? Can David prove he has at least a touch of all of the talents?

EXCERPT:
Rebellion
Five hundred years ago, chaos reigned in the land. From the followers of the goddesses, Sola, Luna and Erda, a group of believers were called. They retreated to a hidden valley in the mountains. The goddesses ordered them to form a community and wait for a call to return to the outer world. A narrow pass over the mountain called the Gap guarded the place they people called Sanctuary.

During their isolation talents arose. Some became Healers and were able to treat and diagnose illness by touch. Sensitives who could read the emotions of others and on occasion read or send thoughts were born. Singers of great power who with their voices could guide and direct others arose. Elders appeared and they could lead and use the voice of command. Teachers who held traces of all the talents and who could tell if a child bore a talent. Of those with the talents there were no more than ten to twenty who bore each gift. Once there had been talented called Seers but there had been no one with a touch of more than one talent for more than twenty years.

The remaining people were commoners. They were divided into four groups. Caretakers cared for the running of the town and those with gifts. Rangers guarded the boundaries of the valley and the slopes. The farmers cared for the land. The herders tended the animals. Many of the commoners prayed one of their children would show a talent.

As the years passed hierarchies developed. The Elders became the rulers. Of the ones gifted as Teachers, there were seldom more than one and during some generations none.
Twice the call to return to the world was heard. Each time the Elders found a way to prevent the dispersal and to keep the number of the community to less than fifteen hundred commoners.
David stood beside the glistening white eye stone near the peak of the winter pasture. The rays of the setting sun focused near the hole in the giant wheel. The spring equinox signaling the beginning of a new year would occur soon. On that day the light of the morning sun would pierce the opening and illuminate the polished circle of black stone. At night, the moon’s rays would do the same.

The people of the hidden community of Sanctuary would gather to celebrate the day the goddesses Sola and Luna cast their light for equal times on their sister goddess Erda. This event signaled the arrival of a new year.
As David watched the other shepherds stride up the slopes a mantle of sadness settled on his shoulders. The men were eager to join their families in the village to prepare for the ceremony celebrating the start of a new year.
No one waited for him. His mother had been banished to a small cottage in the forest. His sister belonged to the Healers. His father had to be dead. Before David’s and his sister’s birth, their sire had been led to the Gap and stoned. After being tested for a talent David had been named a commoner.

The day passed in quiet. The herds grazed and none of the animals caused him or the dogs a problem. The sun neared setting.

He whirled and studied the slopes. The talent he shouldn’t have warned him someone approached. David. His name flowed down the slope and echoed in his head.

Had he heard the call or had his imagination supplied the voice. For several days he’d been edgy. He opened his senses and sensed approaching emotions. Was it Paul? Once they’d been almost inseparable. Was his old friend on the way? Paul had no reason to seek him. He belonged to the elite of Sanctuary. Paul had been favored by the Three and had been selected to train as an elder.

David ran up the path to meet his friend. Paul’s grin brought memories of their childhood. Though slight in build Paul possessed a wiry strength. His stature often made people think of him as frail. David knew better. Paul had been first in sprint races and best at climbing trees. He’d always made David feel like a giant.

Paul halted and ran his hands through his pale blond hair. “Are you hiding out here?” His blue eyes searched David’s face.

David shook his head. “I’m here to lead the flock to the village. Why did you come? Aren’t you being invested at the spring equinox celebration?”

“Are you running away?” No candidate was allowed to leave the village alone.

“Elder John is on my heels. Why weren’t you with the other shepherds?”

“Someone has to guard the flock.” David clasped his friend’s hand. “I have no problem being the drover. There’s no one waiting for me.”

David arched an eyebrow. “Why him?”

“He knew I wanted to see you and he suspects…Tell you later.” Paul’s lips tightened.

David knew Paul wouldn’t speak until he was ready. He wondered what Paul planned. He’d been isolated from his friend and could no longer read Paul’s emotions or hear his thoughts.

“We’ll talk later.” Paul grasped David’s arm and pulled him toward the stone hut. “Elder John and I will spend the night and leave at sunrise. I’ll be back in time to prepare for being invested.”

David stared at the ground. Jealousy pierced his thoughts. He should have stood on the stage of the meeting house too.

His hands fisted and he forced his throat to open. “I’m happy for you.” And he was but the news dropped more acid to erode his self-confidence.

Elder John stepped into view. Heaving gasps rocked his rotund body. He slumped on the stone bench outside the hut. “Have you a place for a weary old man to rest. Preferably prone.”


David clasped the older man’s hand. The elder had always treated him with kindness.
Posted by Janet Lane Walters at 6:42 AM

Definitely prone - to rest. Some nice tension there - leading to questions. Great excerpt.

As usual, an interesting excerpt.