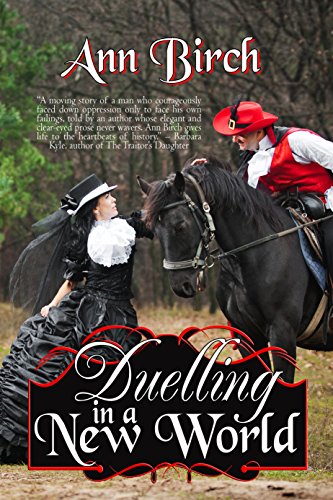 John White is a barrister trapped in a disastrous marriage. In 1792, he breaks loose and strikes out for a new life over the sea, leaving Marianne and his children in England. As Upper Canada’s first Attorney-General, he confronts the conflicts of the early parliament. He pushes through a bill abolishing the import of slaves—long before Britain or America—and he fights to give Aboriginals justice in white man’s courts. He also establishes the Law Society of Upper Canada, still in existence today.
In this new world, John finds pleasure in the friendship of Eliza Russell, sister of Upper Canada’s Receiver-General. They support each other in times of tragedy and despair.
But John makes a grave mistake when he has an affair with Betsy Small, a woman of dubious reputation. Realizing his stupidity, John breaks off the affair and brings Marianne and his family over from England. But Betsy is a vindictive woman who insults his wife, and Betsy’s husband challenges John to a duel. At dawn on January 4, 1800, John takes his pistol and sets out to meet his opponent.

Settlement, a novel of scandal and scurrility, set in early Toronto.  Robert Rotenberg, best-selling writer of thrillers, said: “Birch has that rare ability to use tremendous historical research as a tool to tell a whopping great story.”