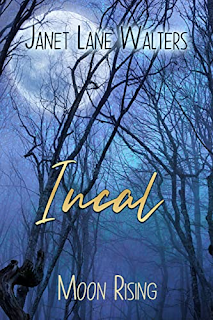 Return to the world where Midra and Midran rule. The god and goddess have two faces. Midra is Mistress of the Moon and also Mistress of the Dark Moon. Midran is Lord of lLght and Lord of shadows.In Incal, the priests of Midran have formed three branches. The Voice of Midran in Incal rules over the mall. In the archived he has read of a tale predicting Three will come to return Midra to the rulership. He sends his acknowledged son to find the three and bring them to him.Many years ago triplet girls were born in a remote mountain town. When they were five, their dying mother sent them to be fostered by three different women. Though they had wed to find each other, their developing talents caused them to forget until twenty ears later each one of them felt the need to find her sisters.Would the Voice of Midran in Incal learn where they were?

Posted by Janet Lane Walters at 10:00 AM

Congratulations on your new release!!!