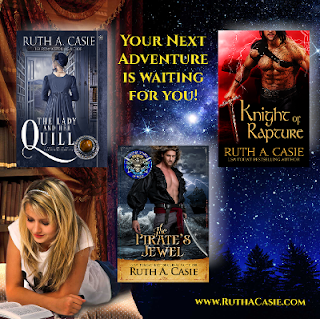 The Lady and Her Quill

Her mind kept telling her to stop loving him, but her heart couldn’t let him go.

Renowned author Lady Alicia Hartley has lost her muse after a bad review. She blames it all on the author JC Melrose. A chance encounter with a handsome, witty Justin Caulfield has her heart racing, and her muse seemingly back. Is he her savior or her worst nightmare?

He didn’t see the turbulent ocean. He was too busy dealing with a different tempest.

The recently retired Captain Justin Caulfield is facing his own demons. As gifted author JC Melrose, his stories honor men who died at the hand of one man. His only focus is to avenge their deaths, that is, until he meets and falls in love with Lady Alicia.

The two authors take on a writing challenge based on a story of stolen gold taken from the newspaper headlines all to determine the better writer. While researching the story, Lady Alicia is captured by the thieves’ ringleader. Can Lady Alicia turn this mystery into an award-winning story? Can Justin save his real-life heroine? Can they both overcome their own challenges for a happily ever after?

Deception and family honor are at stake in this grand Scottish pirate adventure!

Wesley Reynolds will do anything to avenge his family’s banishment from Dundhragon Castle - even throw in with the notorious pirate, MacAlpin. His plan: ruin Lord Ewan’s trading network. He has an even more devious plan for his father’s best friend, the man who abandoned them at the eleventh hour. He’ll ruin the man’s most precious jewel, his daughter Darla. Wesley comes so close to succeeding he can almost taste it, but revenge is not nearly as sweet as Darla’s kisses.

Lovely Darla Maxwell has no prospects of marriage. Her father and Lord Ewan search to find the right husband, but Darla’s special gift frightens her prospects. She is a young woman with visions that often come true, and the murky image of a man haunt her. She is certain that it's Lord Ewan’s soon-to-be son-in-law, but the vision changes when she meets Wesley. To her, the meaning couldn’t be any clearer.

But all is not well. Revelations surface, indicating that Wesley has been deceived and his revenge misplaced. Will he find the truth of what happened to his family in time to stop the pirates? Will Darla forgive him? Most of all, will he ever forgive himself?

She was his witch, his warrior, and his wife. He was her greatest love. Four centuries couldn’t keep them apart.

England, 1605. When Lord Arik, a druid knight, finds Rebeka Tyler wandering his lands without protection, he swears to keep her safe. But Rebeka can take care of herself. When Arik sees her clash with a group of attackers using a strange fighting style, he's intrigued.

Rebeka is no ordinary 17th-century woman - she's travelled back from the year 2011, and she desperately wants to return to her own time. She poses as a scholar sent by the king to find out what's killing Arik's land. But as she works to decode the ancient runes that are the key to solving this mystery and sending her home, she finds herself drawn to the charismatic and powerful Arik.

As Arik and Rebeka fall in love, someone in Arik's household schemes to keep them apart, and a dark druid with a grudge prepares his revenge. Soon Rebeka will have to decide whether to return to the future or trust Arik with the secret of her time travel and her heart.