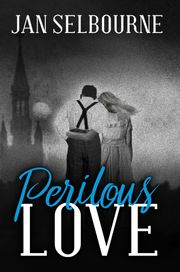 As war looms over Europe, wealthy businessman Adrian Bryce is ordered by the British government to leave his mistress and accompany his estranged wife Gabrielle to Belgium.  They want proof Gabrielle’s uncle is supporting the German Empire and what Adrian discovers plunges him and Gabrielle into a nightmare of betrayal.  Forced to run for their lives as Germany invades, they must trust each other in the midst of danger, brutality, and injury.

Gabrielle enjoys her role of mother of their two children. Wanting only to be with her lover, and now fearful of exposure, she readies herself and her children for a difficult trip.  With no way out, Gabrielle knows the visit with her aristocratic family will be a trial, and Europe is on edge.  She had no idea the danger she, Adrian and her children would be in.

Will Adrian and Gabrielle reach safety? If they do, are they out of danger or will the intrigue and treason follow them back to England?

They met on the eve of a battle. One enlisted to avoid prison, the other enlisted to avoid the money lenders. On the bloodied fields of France, Harry Connelly collapses beside the corpse of Andrew Conroy. It is a risk, a hanging offence, it’s his only hope for a future. Harry swaps identity discs.

Now Andrew Conroy, he is just another face in post war London until a letter arrives with a proposition. Accepting is out of the question, refusing pushes him into a nightmare of greed, blackmail and murder. To survive he must live this lie without a mistake, until Lacey, her secrets and the truth.

The Woman Behind the Mirror

Because of an arranged marriage to a man who repulses her, Sarah Forsythe runs away with the man she loves, the son of a minister. Not to Gretna Green, to the New World. Instead of a country filled with hope and possibilities, Sarah finds broken promises, abandonment, poverty and shame. And her timing couldn’t be worse! After the infamous “tea party,” the siege of Boston worsens as the Americans rebel against Great Britain. Desperate, Sarah breaks open a safe—to find a bundle of documents instead of the cash she needs to survive. She guards the Bank of England documents, however, as she struggles to make the long, difficult journey from Boston back to England.

Bank investigator Neil McAlister doesn’t believe this woman who claims she “found” the documents and wants a reward in exchange for them—until he’s faced with two men using the same name and sharing nearly identical stories, each saying the documents belong to him. Who is lying? In time, Neil becomes aware that something is very wrong. As his feelings for her grow, he needs to know who wants the beautiful, defiant, and secretive Sarah dead?

Amazon.com : the woman behind the mirror jan selbourne