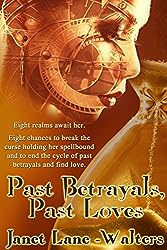 Today my offering on the blog hop is  Past Betrayals, Past Loves a reincarnation novel. Join me here and also give the other great authors here  http://mfrwbookhooks.blogspot.com

BLURB:
A curse sends Astrid on a journey to ancient lands. She meets deceit and betrayal searching for true love and to break the curse. The search begins in Egypt. When she touches an ancient Egyptian necklace she is hurtled through time into the turbulent life of another woman. She discovers the words spoken in anger holding her spirit captive. Seven more times she finds a piece of jewelry and returns to a distant past. In each of these lives she encounters and falls in love with a man who seems to be someone recently met in her present as do the enemy man and woman.
The heat between Astrid and Duncan is instant and becomes incandescent. Her dislike of two characters grows. Eight realms await her. Eight chances break the curse holding her spellbound and to end the cycle of past betrayals and find love. Eight chances to foil the evil man and woman who follow her and Duncan from era to era.

"I stopped at the hospital." A sigh escaped. "I can't believe he had a stroke. He's always been so healthy."
Clive clasped her hands. "He's tough. Before long, he'll be back cluttering the place."
"Hope not. You've achieved wonders here." She tried to free her hands. He tugged her closer. "The apartment looks like a magpie's nest."
"Good description." He brushed her lips with his.
Astrid shook her head. She wanted to wipe her mouth. Would he start another pursuit this summer? "Let's stick to business. I like the arrangement of the stock."
"A suggestion from a new customer. Rich playboy type, but he has good taste. Garrett and your dad connected. Act like they've known each other for ages."
She crossed her arms on her chest. "Why were you and Dad arguing?"
He groaned. "Guess you talked to nosy Sarah. Was more like a heated discussion about displaying two new pieces he recently found. Bought this sealed box at a sale. Odd assortment."
"How odd?"
He laughed. "Nothing bad. Mostly a collection of Victorian jewelry and these two pieces. He wanted to research them before they were offered for sale. I wanted to price them immediately. You know how hard it is to date the things we acquire."
She nodded. "So where are they?"
"Most of the jewelry is in the vault and I can't get to them."
"I--" She cut off her response. She knew the code for the vault and would see what he meant in the morning.
He took her arm. "I'll show you the two pieces I kept out and introduce you to Paula Winters. She's photographing a number of our best pieces for a catalogue we're launching."
"Another suggestion from Dad's new friend?"
"In a way." He entered the Egyptian area. "Astrid, Paula Winters. Astrid is Lloyd's daughter. She's here for the summer, then it's back upstate."
Astrid didn't contradict him. Her plans weren't his business.
The woman turned. "Teacher?" She gazed at Clive.
"School nurse." Astrid read admiration in Paula's eyes. Did Clive return the interest? He usually went for petite and curvy. Paula was slim, almost boyish. The blunt cut of her shoulder-length auburn hair reminded Astrid of styles she'd seen on ancient Egyptian women.
Paula's crooked grin warmed Astrid. "Glad to finally meet you. Your dad talks a lot about you."
"Don't believe everything he's said. What are you photographing today?" Astrid asked.
"Starting with the Egyptian collection. The new pieces are stunning. Clive thinks it's a good idea to have a visual record of the things in the shop."
Astrid turned to Clive. "Then there is a problem."
"I told you several pieces were missing."
"Thieves?"
"I hope not, but this has been going on since right after Easter."
Astrid frowned. Why hadn't Dad mentioned the problem? She edged toward the stand where a necklace and crown were displayed on a black velvet cloth. Where had she seen these pieces before? The necklace resembled a wide collar. Semi-circles of a pale gold metal were inlaid with lapis. From the last row, carnelians dangled. The headband of the same metal had flowers of inlaid lapis with carnelian centers.
"Are these the items you and Dad argued about?"
Clive nodded. "He wanted to put them in the vault."
"Why have you displayed them?"
"One, I can't open the vault and two, they're too attractive to hide."
Astrid brushed a finger over one of the dangles. Sadness washed over her. As though under a spell, she lifted the necklace. Waves of dizziness rocked her.
* * * *
Seshat stood at the entrance to her workroom built against the wall of the villa. She stared into the garden. Though chaos ruled the Two Lands, in this house at a distance from , only echoes of the troubles were heard. How fortunate that her father, Nomarch Sehetep, had distanced himself from the politics of both halves of the divided land.
She heard her younger sister giggle and watched her run toward the workroom. "What have you done now?"
"Spied on Father," Tiy said.
Seshat shook her head. Tiy hovered between childhood and womanhood. She delighted in mischief. Seshat left the doorway and reached for the tallies of the recent harvest.
"Don't you want to know what I heard and what I saw?" Tiy's warm brown eyes sparkled with mischief.
"Tell me."
"We have guests. From . Oh, Seshat, they are the most handsome men I have ever seen. They seek father's support. One of them wants the Double Crown. Maybe he will choose you as his wife and ignore Nefru."
Seshat sighed. If she were chosen, Nefru, daughter of their father's dead first wife, would be furious. Though Seshat's mother had been a princess of a past dynasty, Nefru denied the claim. Seshat sighed. Anyone seeking Sehetep's support would choose the oldest daughter. Since no sons had been born to the house, Nefru's spouse would claim the nome when Sehetep left this world.
"We're to eat the evening meal with them," Tiy said. "Nefru stamped her foot when she heard. When these men see you, they won't look at her."


Posted by Janet Lane Walters at 6:47 AM

An amazing cover, Janet, and a very intriguing premise!

I love this cover

What they said! Wonderfully complicated!

Wow! I love time travel (and I write it, too) and this sounds like 8 adventures in one! Will put on my "must read" list.

Love the cover and the concept - time travel is tough to write. This was great.

This novel intrigues me. I shall read and review it. Only for the record, I wrote a novel about a heroine who was reborn seven times before she was reunited with her true love. When I have time, I will rewrite it and hope that it will be published.

All the best,
Rosemary