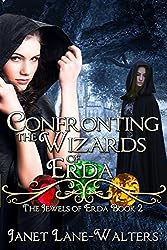 Join me today and other MFRWauthors in a blog hop to discover new books and authors here http://mfrwbookhooks.blogspot.com

Blurb:
Two of the Jewels have no Holders and they must be found. The Brotherhood of Wizards also seeks to find them. Jindera is one of the pair and she must escape her cruel uncle. She wishes to find her twin brother taken by the Wizards who will use him in their attempt to destroy the Jewels of Erda. As twins, they can speak via the Inner Path. The Wizards hope to use this.
Mara, is a clanless desert dweller and faces life as the abused plaything of a future clan leader. She flees into an unknown future. On the winds, the crystals call this pair.

BUYMARK:
Confronting the Wizards of Erda (Jewels of Erda Book 2)

The stench of illness pervaded the room where her mother lay on a narrow cot. Jindera’s breath caught. For a moment, she thought her mother had left this plane without the blessing to release her.
Holding back a sob, Jindera fled to the kitchen to blend a fever potion. She carried the mug of steaming liquid to the sick room and spooned the medicinal into her mother’s mouth. A drop or two fell on the linen sheet and spread like the tears Jindera held inside. She inhaled deeply. She had to hold grief and fear at bay. When the mug was empty, she rested her head on the edge of the mattress and prayed the remedy would work.
She jerked awake. How long had she slept? The light in the room told her ‘twas near midday.
The rasp of labored breathing filled her ears. She felt her own breaths fall into the same pattern. She raised her head and turned toward the door. Where was Lajin? She tried to reach him on the inner path where they could speak in secret. Flight. Fear. What had happened to him? Her hands and body shook. His fear or hers?
Jindera rose and looked outside. The fragrant scents of the garden brought a welcome calmness to her troubled spirit. ‘Twas a false hope. If Mama dies, what will Lajin and I do? Having but sixteen years, they weren’t old enough to hold the land.
She heard a rasping cough and turned back to the cot. Her mother’s eyes were open. A wave of hope spread through Jindera. “Mama.”
“Leave. You. Lajin.  Go soon. Danger comes.”
“We can’t leave you without saying the blessing.”
“Must.”  Racking spasms shook her mother’s body.
“Mama, don’t talk.”
“Must. Once. Three sisters.”
Jindera listened to her mother’s halting words. A grandsire who was a Master Wizard. Mama born on the desert and leaving with her older sister for a Healers’ House. How her two sisters wanted power and schemed to obtain control of others. One who had talent. One who had none. Mama who had talent and wanted love.
“Ralor. Comes. He hurt. You. Lajin. No Healers’ House. Not good.”
“Mama, be still.”  Jindera pressed her hands against her mother’s shoulders.
“Starflowers. For Ralor. Make tea. He sleep. Then flee. Remember, danger from Healers.”
Jindera chewed on her lower lip to keep from crying. The door opened and for an instant, she feared her father’s brother had arrived. The garden, the guardianship, the cottage would pass to him and to the one the Healers sent to tend the garden. The door opened. She turned.
Lajin stood in the doorway. His flushed face and panting breaths told her he’d been running. “What’s wrong?”  she asked.
“Black robes in the village. Taking boys. What will I do if they come here?”
Jindera shivered. The Wizards would learn about Lajin’s talent for nurturing plants. They would take him. “You must flee to the forest and hide. Go now.”
He knelt on the other side of the cot. “Not until we say the blessing.”
“Son. Daughter. Go.”
Jindera grasped her mother’s hand. Lajin took the other. “Mama.”
The heavy breathing slowed, then stopped. Had she willed her death?


Jindera’s voice joined Lajin’s. “Fare well, Mother. May the sun shine on your days and the moons light your nights. Let your shade depart and do not hover between this plane and the next.”

Why do people never run when they have the chance? Of course, if they did, there would be no tension or conflict. But geez, I was yelling at them to run! lol

Interesting voice. It really has the feel of a different culture.

That last paragraph is beautiful.