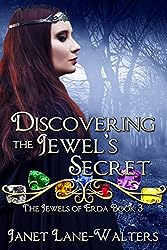 Join me and read excerpts from other great writers here:  http://mfrwbookhooks.blogspot.com

Seven Jewels – Seven Holders and their bondmates. The words of an elderly Healer send each pair on a quest to learn the secret of the Jewels. Are these gems just tools or do they hold hidden danger for the Holders? The seven leave on seven quests to discover the answers. When they find the answer, they must decide the fate of the Jewels.

Discovering the Jewels' Secret (The Jewels of Erda Book 3)

Seven Jewels and seven threads. Find them, twine them, bind them into a braid to discover how to unlock the secret of the Jewels. What was pale becomes dark and dark changes to light. Sometimes destruction is the way to end a cycle of tyranny.  Blazing sun and icy moons unite in the Yellow Jewel. You must go over land, across the sea and back again. Seek the thread and learn this lesson. What makes a home does not have to be a place. Fears may lurk and fears are faced when one learns to trust.

Disa turned and waved farewell to the Holders and their who remained at the wizards’ stronghold. All but she and Brader stayed to tend to the living and the dead. Just days ago, the elderly healer had appeared and had given prophecies to all. The moment Disa had heard those words she knew she and Brader had to leave. Their role in the destruction of the wizards’ lair had ended. The overland journey to Quato where they would board a ship to Thanis would take a seven day.
She prodded her horned horse and caught up with her companion. “Must we race like prisoners released from a dungeon?”
He slowed his steed. “Why not? I wish to reach my home as soon as I can.”
Home, she thought. Hers had been a peddler’s wagon and then the tavern in Pala. She didn’t understand his being drawn to a place. “Thy home won’t run.”
He laughed. “Thee are right, but some inner yearning pushes me to hurry to High Sanctuary. What if the wizards have established a refuge there?”
She made a face. “Didn’t Andalor mention a ship filled with Queen’s Guards and wizards that arrived in Quato around the time when thee did?”
“One or more might have remained. I need to find out.”
She supposed he was right but that wasn’t his real reason for the rush to return to his home. He wanted to visit his mother’s grave to bid her farewell. Did he really believe her spirit lingered on this plane waiting to hear of the success or failure of Liara’s quest?
At dusk they arrived in Desert’s Edge where they purchased enough supplies for the journey. She nearly suggested they stop at the Healers’ House for medicinals, but could think of none they would need before they reached the market in Quato.
Eight days of traveling from dawn to dusk brought them to the seaport town. On the outskirts they passed the villa where she had received her Jewel. “Remember our time here?” she asked.
“Clearly. What a pompous fool I was. Attacking Valmir when he wasn’t the enemy. Angering Liara and thee.”
She reached for his hand. “Thee feared someone would harm her and keep her from the quest.” She sighed. “I wonder how the others fare.”
“If there were problems couldn’t they reach us on the inner path?” Brader asked.
“I don’t know. I’ve listened every night and the voices have grown fainter. Should we stay here or go directly to the docks?”
He prodded his horse. “This is too far from town. We’ll find an inn. Word of ships leaving for Thanis will be heard at one, but we can’t leave for a day or two.”
She nodded. “We have to sell the horses.”
“And arrange for passage. We’re too late for today’s animal market.”
Once inside the town Disa led him to the inn where she and Andalor had stayed. They were in luck and one of the suites on the third story was available. After leaving their packs in the suite’s central room, they ordered a meal to be brought as soon as they finished in the baths.
A short time after returning to the suite, Disa opened the door for a serving woman bearing a large tray of food. Disa inhaled the aroma of brewed chokla and grinned. She slipped the woman a coin. Brader entered from his sleeping chamber. He fastened his amber colored hair at his nape with a thong.
“What of our plans for tomorrow?” Disa filled a mug with her chosen drink.


“Sell the horses. Find a ship. Purchase some extra food for the journey. Ship’s food is plain and sometimes not tasty.”

Posted by Janet Lane Walters at 6:43 AM

Labels: #MFRWHook, Discovering the Secret of the Jewels, Wednesday

Ship's food. Married to a sailor. Know the truth of that! Hubby used to dunk his food in a glass of water to wash off the grease. His friends called him Raccoon. ;)