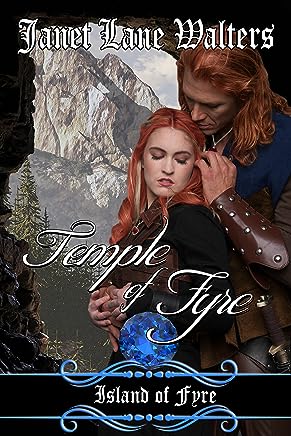 Join some great authors at #MFRWHooks here  http://mfrwbookhooks.blogspot.com For some great excerpts. Mine is found at http://wwweclecticwriter.blogspot.com

Sold by her family to the priestesses of the Temple of Fyre, Ria soon masters using each of the four fyrestones, white, yellow, orange and scarlet. Her curiosity leads her to the archives and there, she learns things that disturb her. There are no men serving as priests but in the past there were. Men are kept in the harras where the priestesses visit. On the day of her testing she is ordered to perform a task she dislikes and refuses to destroy a town. Many of the priestesses fall into unconsciousness. Melera, the chief priestess, beats and banishes Ria for the carrion crows to consume.
Ari was abandoned as a child and found by two elderly firestone miners. He has pursued this and is the best of the finders. He goes to the temple to sell the stones he has gleaned. On leaving, Ria attempts to steal the fyrestone he has worn since the day he was found. He thinks she is a boy and a thief and he takes her to his room at the inn. On discovering her identity, he refuses to turn her over to the priestesses and they leave town. They are searching for the fabled blue fyrestones. They also learn to use them they must be bonded physically, emotionally and spiritually. Can they learn to master the blue stones and defeat Malera so they can rule the temple with love and understanding?


Ria stuffed the scroll she’d taken from the shelves beneath her caftan and tightened the sash to make sure the cylinder holding the rolled papyrus remained hidden. Beads of perspiration covered her forehead. She rubbed the sleeve of her robe over her face. The night air held sultry remnants of the heat of the day. Usually, the thick walls of the temple complex kept the rooms and corridors cool. Tonight was different. The usual night breezes were absent so the heat remained. Perhaps the approaching solstice was the cause?
Or, maybe her fear of discovery caused her heart to thump against her chest and her muscles to tighten into confining bands? She was in a place where she had no right to be without the presence of one of the priestesses. Acolytes were forbidden full access to the scrolls found in the scriptorium. She drew a deep breath. She’d acted out of necessity. The scroll beneath her caftan was one she’d discovered during another of her night searches. She wasn’t permitted to read this one, but she had and the words had stirred questions her tutors had refused to address.
On the morrow, her ability to control the flames of the fyrestones would be tested. She would be ordered to call flames from a pair of scarlet crystals and blend her blaze with those raised by the priestesses of the circle. Then, the chief priestess would assign her a task. Ria believed the things she’d read in this particular scroll would help her during the ordeal. The test was not without risk. One slip and the flames she sought to control could turn her into a living torch.
She crept to the scriptorium door and peered into the hall. With senses alert, she listened and searched the shadows cast by the flickering torches on the white plaster of the walls. Sensing no one was nearby, she scurried along the corridor toward the living quarters of the priestesses and acolytes. With luck, she would reach her room without being discovered.
Her hand pressed against the scroll she wanted to read again. The words of this particular one were vastly different from the lessons she’d been taught by the priestesses. Had they lied? Were the ways to use the fyrestones described in these writings true, or were they only a fable invented by some ancient scribe?
There were other scrolls that told tales that seemed unreal. The aged priestess in charge of the scriptorium had laughed when Ria had asked about dragons with eyes the color of the scarlet fyrestones. The old woman had scoffed when Ria had showed her passages describing wands wielded by wizards that sent lashes of bright or dark flames to control people.
There was no one she could ask if this scroll contained truths. Questions weren’t encouraged. Still, she wanted to believe what she’d read in this scroll about the uses of the stones, for they told of helping the people and that appealed to her.
Ria sighed. Since the day she’d been bought from the slavers by the chief priestess, her life, though interesting had been lonely. Not for her the crowded classrooms, or the dormitory where she could form friendships with the other acolytes. She had her own chamber and a private bathing room. During her lessons, she’d been the only student. Even her meals had been taken with the priestesses, not the other acolytes.


Why had she been kept isolated from the other acolytes? What make her so different? Like Ria, most of the others had been brought to Rosti by the slavers. At twenty, she was a year or two younger than most of the young women who had entered the temple with her.

BUY MARK
http://bookswelove.net/authors/walters-janet-lane-romance-fantasy-suspense-medical/
Posted by Janet Lane Walters at 6:42 AM

"Questions weren't encouraged." That hits close to home for many people.

Certainly does. Thanks for stopping by

Intriguing - she ahs lots of questions - hope some are answered.

No Twitter button. Don't know how to get one.

You communicate her haste and secrecy, giving this snippet a lot of momentum.

Did someone mention Dragons? I love the whole premise of this. The secrecy, the study, the power. I need to read more.